Chakra: Vishal Confirms That His Upcoming Actioner Will Release in Theatres on February 19!

South star Vishal took to Twitter and officially announced the release date of his upcoming film. The actor was last seen in Sunder C's flick Action (20019) and will now be seen in debutant MS Anandan film Chakra which is all set to release in theatres on February 19. 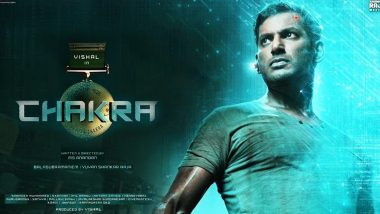 South star Vishal took to Twitter and officially announced the release date of his upcoming film. The actor was last seen in Sunder C's flick Action (2019) and will now be seen in debutant MS Anandan film Chakra. Earlier, it was reported that Vishal's next will be going the OTT route, however, there's no reality to it. As the lead actor of the film as officially announced that Chakra will make to the theatres on February 19, 2021. This one is said to be out in all four South Indian languages, which are, Telugu, Tamil, Kannada, and Malayalam. Chakra: Here Are Few Unmissable Stills of Vishal and Shraddha Srinath from Their Upcoming Film! (View Pics).

Produced by the actor's Vishal Film Factory, it's reported that the actor will play the role of an army officer. Apart from the lead, Chakra also stars Shraddha Srinath as a police officer whereas Regina Cassandra is said to portray the role of an antagonist in the flick. It'll also star Shrusti Dange, Robo Shankar and many more. Having said that, we know, fans of Vishal will be on cloud nine as finally, Chakra will see the light of the day. Chakra Teaser: Vishal's Next Film About Cyber Hacking Intrigues With New Promo (Watch Video).

We have planned to release our action thriller film #Chakra in theatres on February 19th in all 4 South Indian Languages. Going to be a grand release. Looking forward to it... GB

This film will be based on the premise of cyber hacking. All that being said, earlier Chakra had gone through a legal mess where the Madras HC had put a stay on the movie's OTT release as per a complaint filed by Trident Arts, the producers of Vishal's previous film. The actor was accused of owing the production house Rs 8 crore as loss incurred from Action. However, later the stay was lifted and now Chakra is coming at theatres near you. Stay tuned!

(The above story first appeared on LatestLY on Feb 01, 2021 05:29 PM IST. For more news and updates on politics, world, sports, entertainment and lifestyle, log on to our website latestly.com).