A source close to the development informed that the Dhruv could play one of the two leads in the movie along with his father, Chiyaan Vikram 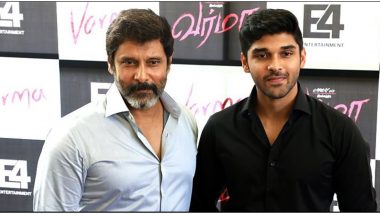 There's some good news brewing for all Vikram fans as the actor is all set to collaborate with his son, Dhruv in his next. While the star kid made his debut in Adithya Varma, a remake of Arjun Reddy in 2019, he's yet to sign his next and seems like Chiyaan 60 could be that very project. Currently, Vikram is busy with his two prime projects - Mani Ratnam's Ponniyin Selvan and Cobra. Post this, there are reports that he'll be working in Petta director Karthik Subbaraj's film that's tentatively titled Chiyaan 60. Chiyaan Vikram's Look as Mahavir Karna Revealed! Director RS Vimal Shares BTS Video from the Upcoming Epic Film on His Birthday.

A source close to the development in his conversation with India Today informed that the Dhruv could play one of the two leads in the movie along with his father, Chiyaan Vikram. Subbaraj had apparently narrated the script to the actor way back in 2017 when he was still shooting for Iru Mugan. He was very impressed with the narration and decided to go ahead immediately. Unfortunately, it took so many years for them to actually start working on it. Cobra First Look: Chiyaan Vikram Introduces us to His Many Avatars and they All Look Intriguing.

As per sources, the movie is a gangster drama which will be shot majorly in Chennai. Vikram was shooting for Cobra in Russia when they were asked to shut down the shooting and return to India, The actor will now finish his current projects before starting his next with Subbaraj. The director is also waiting for his upcoming film, Jagame Thandiram, with actor Dhanush to hit the screens post lockdown.

(The above story first appeared on LatestLY on Jun 04, 2020 03:56 PM IST. For more news and updates on politics, world, sports, entertainment and lifestyle, log on to our website latestly.com).