Malayalam superstar Mohanlal says, "The advantage of Drishyam 2 releasing on an OTT platform is that this movie will have an exclusive premiere globally." 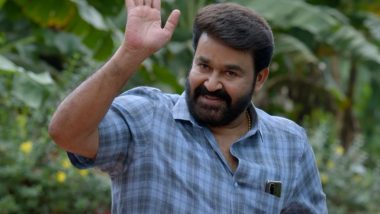 New Delhi, Feb 12: Malayalam superstar Mohanlal has entertained his fans for over three decades now. He has delivered back-to-back blockbusters on the big screen. As the attention of cine-lovers gets focused on OTT platforms lately, he said these are exciting times for everyone in the film industry. The actor, who will soon be seen in Drishyam 2, which drops digitally on February 19. "The advantage of Drishyam 2 releasing on an OTT platform is that this movie will have an exclusive premiere globally. Making it available to avid cinephiles across 240 countries will help us reach a wider segment of audience across regions and languages. I hope the audiences will truly enjoy the experience of 'First Day, First Stream'. The medium changes but my pursuit of entertaining my fans remains unchanged," he told IANS. Drishyam 2: Pics Of Mohanlal And Meena’s Reel Family That You Must See Before The Film Releases!

The actor, who has given memorable performances in films such as Chandralekha (1997), Rajavinte Makan (1986), Poochakkoru Mookkuthi (1984) Narasimham (2000) among numerous others, acknowledges that OTT brings down boundaries of language and giving regional actors a larger audience.

"These are exciting times! We are witnessing a new era in Indian entertainment where the viewing habits and preferences of consumers are evolving. Our effort is to bring to the audience across the globe, the very best stories, which is why we are absolutely delighted to see our film release on an OTT platform," he said. Did he have to adapt to a different acting method for an OTT release? He replied: "All the procedures and methods were similar to the regular methods of creating a feature film."

While the Malayalam thriller Drishyam was a superhit upon release in 2013, all eyes are on Drishyam 2. Mohanlal, who starred in the first film too, says that the second part got delayed because everyone in the team was willing to create something perfect with this Jeethu Joseph directorial. Drishyam 2 Trailer: Dead Secrets Return to Haunt Mohanlal's Georgekutty and Family; Movie To Release on February 19 on Amazon Prime (Watch Video).

"The pressure to present the story and live up to audience expectations was definitely there which is why there was a delay to release the sequel. To bring out a movie with this kind of characters, emotions and intelligence, you need a minimum of seven to eight years. Great things always take time. If you observe carefully, Drishyam 1 was a family drama right till the first half of the movie since one is completely unaware of what is coming their way," he said.

The actor added: "The film picks up the pace with the excitement and suspense going several notches higher in the second half going on to become a nail-biting thriller. Since one already knows the back story in Drishyam 2, the pressure comes in naturally as our story is in competition with itself. Having said that, I am confident that the audience will love the story and the movie."

(The above story first appeared on LatestLY on Feb 12, 2021 01:57 PM IST. For more news and updates on politics, world, sports, entertainment and lifestyle, log on to our website latestly.com).