Koode First Look: Prithviraj Sukumaran, Nazriya and Parvathy Come Together For A Road Trip In Anjali Menon's Next 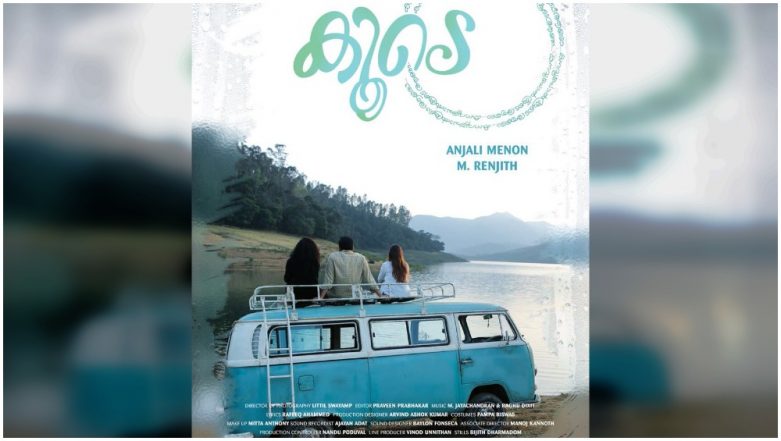 Anjali Menon is one of the most sought-after filmmakers in Malayalam cinema right now. Each of her movies had something interesting to offer, and her last couple of film, Ustad Hotel and Bangalore Days, were huge hits. Now she is ready with her next, Koode, which brings in an exciting cast, as well as an intriguing take on relationships. The movie stars Prithviraj Sukumaran and Parvathy, making this their reunion after the heartwarming Ennu Ninte Moideen. Nazriya, who took a hiatus from acting after marriage to Fahadh Faasil, also returns to the big screen with Koode.

The director has revealed the first look of the movie (as seen above) on Facebook. The poster has the three leads, Prithviraj, Nazriya and Parvathy, sit on top of a van, and gaze into a lake in, we thinks, Munnar. From the poster, Koode gives us the feels of a road trip movie. Interestingly, Anjali Menon calls it a tale of relationships. While sharing the poster on Facebook, she captioned it as, "Delighted to share with you the title of our new film– Koode. What is Koode? #Koode is a heartwarming tale of relationships. The film has Prithviraj, Nazriya & Parvathy in the lead. We hope you enjoy it as much as we enjoyed making it. Watch it only in Cinemas this July!"

The lead actress Parvathy, who got Special Mention at the National Awards this year for her performance in Take/Off, also tweeted the poster.

Here is a heartwarming tale that gently nudges your heart to beat better. A tale that ever so tenderly takes you by your hands and reminds you that love shall never leave you. Here is “Koode” for you ! @koodethemovie @AnjaliMenonFilm #KoodeTheMovie #Koode pic.twitter.com/wQy9VhPK28

All the three leads have worked with Anjali Menon at some point of their career. Prithviraj had a special appearance in her debut movie, Manjadikkuru. Both Nazriya and Parvathy played the female leads in Bangalore Days. With Koode, we do hope they have planned a magical trip for the viewers.