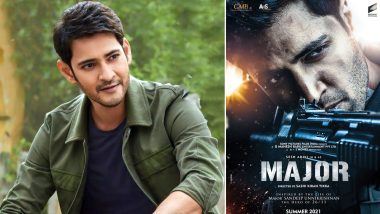 As promised, the makers of the upcoming bilingual film, Major, have released Adivi Sesh’s look as Major Sandeep Unnikrishnan. Mahesh Babu, who is producing the film under the banner of GMB Entertainment along with Sony Pictures Releasing International and A+S Movies, has shared Adivi’s look from the film and has also extended the lead actor heartfelt birthday wishes. Adivi, who is celebrating his 35th birthday today, would be portraying the role of the hero of 26/11 attacks. Major First Look: Adivi Sesh’s Look As Major Sandeep Unnikrishnan To Be Unveiled On The Actor’s Birthday!

Actor-producer Mahesh Babu who was thrilled to release the first look wrote, “Happy to present the first look of #Major!! Wishing you a very happy birthday @AdiviSesh. I’m sure Major will go down as one of your best performances. Good luck and happiness always!” Major Sandeep Unnikrishnan was martyred in action during the November 2008 Mumbai attacks and this upcoming film directed by Sashi Kiran Tikka is inspired by his life. Adivi Sesh Birthday: Panjaa, Baahubali – 5 Popular Roles Of The Tollywood Hero That Are Power-Packed!

Happy to present the first look of #Major!! Wishing you a very happy birthday @AdiviSesh. I'm sure Major will go down as one of your best performances. Good luck and happiness always! 😊 pic.twitter.com/q5BLRj8ewn

In the first look poster, we can see Adivi Sesh in a fierce avatar, sporting a roughly bearded look and all geared up to fight against the terrorists. Apart from sharing the look of the actor, the makers have also revealed that Major would be hitting the theaters during the time of summer next year. The exact release date is yet to be shared. Major will also feature actresses Sobhita Dhulipala and Saiee Manjrekar in key roles. The film is being shot simultaneously in Telugu and Hindi languages.

(The above story first appeared on LatestLY on Dec 17, 2020 10:23 AM IST. For more news and updates on politics, world, sports, entertainment and lifestyle, log on to our website latestly.com).