Mammootty In CBI 5 And Dulquer Salmaan In Salute: Netizens Say ‘Like Dad, Like Son’ After Seeing The Actors’ Latest Looks From Their Upcoming Films (View Pics)

Mammootty is all set to make his comeback as Sethurama Iyer in CBI 5, the popular CBI films series. On the other hand, Dulquer Salmaan would be seen in the crime-thriller titled Salute. 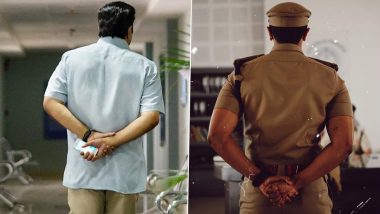 Mammootty and Dulquer Salmaan are undoubtedly the coolest and the stylish father and son duo of Mollywood. They have won hearts with their works and charm. Fans of Mammukka and DQ are right now crushing over the actors’ style from their upcoming films. Mammootty is all set to make his comeback as Sethurama Iyer in CBI 5, the popular CBI films series. On the other hand, Dulquer would be seen in the crime-thriller titled Salute. CBI 5: Mammootty Joins The Sets Of The Film! Mammukka Fans Are Going To Enjoy The Iconic Theme Music Played In The Background (Watch Video).

Mammootty and Dulquer Salmaan shared their looks from their respective films, CBI 5 and Salute, on social media and fans just couldn’t get over their similar mannerisms in the new stills. In the still shared by Mammukka, the veteran actor was seen in a simple, casual outfit, walking in a corridor of a building with his hands behind his back. DQ too shared his look as Sub-Inspector Aravind Karunakaran, dressed in police uniform, and he too was seen holding his hands behind his back and reporting to his senior. Fans went gaga seeing these similar looks and commented on social media saying ‘Like Dad, Like Son’. Dulquer Salmaan's Salute to Release on January 14, 2022.

We're All Hearts Too For Them

Just Can't Wait For It

CBI 5, the upcoming investigative thriller, is directed by K Madhu. Mammootty started shooting for the film in December 2021. Salute, directed by Rosshan Andrrews, is slated to be released on January 14.

(The above story first appeared on LatestLY on Jan 10, 2022 03:14 PM IST. For more news and updates on politics, world, sports, entertainment and lifestyle, log on to our website latestly.com).