The makers of this upcoming flick Master would be releasing the lyrical video titled “Quit Pannuda” and fans are thrilled about it! 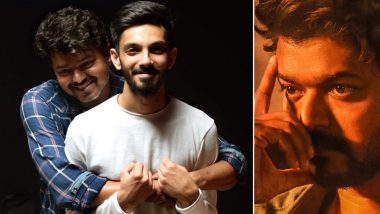 Fans of Thalapathy Vijay are going to be in for a major treat on October 16, 2020! And it is indeed going to be double celebration for Anirudh Ravichander. The ace music composer is celebrating his 30th birthday today, and on this special occasion, the makers of Master have not only decided to turn it a memorable one for Anirudh, but even for the fans. The makers of this upcoming flick would be releasing the lyrical video titled “Quit Pannuda” and fans are thrilled about it! Master Song Vaathi Coming: Thalapathy Vijay’s Chartbuster Track Crosses 60 Million Views on YouTube!

Fans of Thalapathy Vijay have been using the hashtag #QuitPannuda and trending it out on Twitter. This track, the lyrics of which has been penned by Vignesh Shivan, will be out today at 6pm and one just cannot wait for it. It is after a long time that the makers of Master are releasing something special and fans just cannot contain their excitement. Director Lokesh Kanagaraj had shared a tweet on the same last evening that read, “UPDATE! Rockstar’s birthday special. Smiling face with smiling eyes #QuitPannuda.” Master Song Andha Kanna Paathaakaa: Lyrical Video Featuring Thalapathy Vijay and Malavika Mohanan Is a Musical Treat for Kollywood Fans!

One of the fans extended birthday wishes to Anirudh Ravichander and wrote, “Happy Birthday To The One Of Best Musical Icon Of Kollywood “Rockstar Anirudh” on Behalf Of All Thalapathy Fans Background Score For Kaththi Is Enough To Say His Class Smiling face with sunglasses Madly Waiting For #Master Background Score”.

Happy Birthday To The One Of Best Musical Icon Of Kollywood " Rockstar Anirudh " on Behalf Of All Thalapathy Fans ❤️ His Background Score For Kaththi Is Enough To Say His Class 😎 Madly Waiting For #Master Background Score 🔥😎#HBDRockstarAnirudh @anirudhofficial#QuitPannuda pic.twitter.com/BCeXY1Seor

Another fan mentioned, “we can't wait until then, it would be nice if there was a #QuitPannuda Lyric  release now”.

The excitement for the lyrical video of Master song “Quit Pannuda” is sky high! Master that also features Malavika Mohanan and Vijay Sethupathi in the lead is produced under the banner of XB Film Creators.

(The above story first appeared on LatestLY on Oct 16, 2020 10:01 AM IST. For more news and updates on politics, world, sports, entertainment and lifestyle, log on to our website latestly.com).