The Ghost: Review, Cast, Plot, Trailer, Release Date – All You Need to Know About Nagarjuna Akkineni and Sonal Chauhan’s Film

The Ghost is produced under the banners of Sri Venkateswara Cinemas and North Star Entertainment, starring Nagarjuna Akkineni and Sonal Chauhan in the lead. 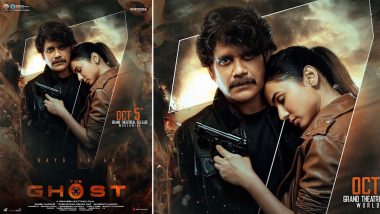 The Ghost is the upcoming Telugu film starring Nagarjuna Akkineni and Sonal Chauhan in the lead. Written and directed by Praveen Sattaru, fans are pretty thrilled about this action thriller. The posters, trailer, songs and all have left movie buffs intrigued and amped up their curiosity to know what is in store. The Ghost has faced several delays owing to the pandemic, but the long wait to watch it on the big screens would be coming to an end soon. The Ghost Trailer: Nagarjuna Akkineni's Next Is High on Action and Emotions (Watch Video).

The Ghost is produced under the banners of Sri Venkateswara Cinemas and North Star Entertainment. Let’s check out some of the key details of the film ahead of its theatrical release.

Plot – The synopsis of the film reads, “Vikram is a retired RAW field operative who is now working in the Indian Embassy. One day, he receives a call from his sister Anu, who request him to protect her daughter Aditi. Vikram starts protecting Aditi and wages a war against the crime syndicate, who has been terrorizing them.”

Watch The Trailer Of The Ghost Below:

Release Date – The Ghost is slated to hit the big screens on October 5.

Review – The reviews for The Ghost are not out yet. LatestLY will share it as soon as the review of the film is out!

(The above story first appeared on LatestLY on Oct 04, 2022 12:32 PM IST. For more news and updates on politics, world, sports, entertainment and lifestyle, log on to our website latestly.com).