The Telugu movie V, starring Nani and Sudheer Babu in the lead, premiered today on Amazon Prime Video. This film is written and directed by Mohana Krishna Indraganti. 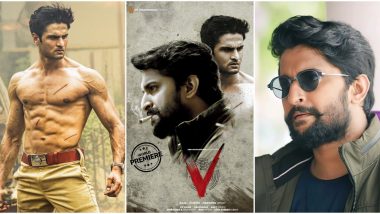 The Telugu movie V, starring Nani and Sudheer Babu in the lead, premiered today on Amazon Prime Video. Written and directed by Mohana Krishna Indraganti, this was one of the most-anticipated movies as it would be featuring Nani in a negative avatar for the very first time. Not just that, V is also the 25th film of Nani and movie buffs have been totally thrilled about it. V Movie Review: An Insanely In-Form Nani Is Joker to Sudheer Babu’s Dashing Cop in This Thrilling Affair.

Nani is seen as a serial killer named Vishnu and Sudheer Babu plays the character DCP Aditya. When the makers had dropped the teaser and the trailer of the film, it was clear that V is going to be an action-packed thriller and there are going to be many nail-biting moments. There are many critics who have managed to watch the film and have even shared the reviews. Let’s take a look at the reviews shared by critics on V. V Trailer: Nani and Sudheer Babu’s Upcoming Telugu Film Is A Power-Packed Action Entertainer (Watch Video).

News18 – Telugu cinema is still imprisoned in a time warp. Melodramatically theatrical and prone to exaggerated performances and narrating a story through long discourses and not visuals, it woefully lacks modern cinematic language. Amazon Prime Video's latest offering, V, helmed and written by Mohana Krishna Indraganti, calls itself a thriller with injustice and anger and revenge packed into it.

Times of India – Nani even gets some whistle-worthy moments and entries, despite being the antagonist of this tale. Sudheer Babu wavers as the super-cop he plays. He’s believable in the action scenes, especially ones that require him to be shirtless. PG Vinda’s camerawork, Thaman S’ BGM and Marthand K Venkatesh’s editing do their best to hold this film together and they do succeed for the most part.

The Indian Express – The director drastically undercuts the weight of the supercop character to benefit Nani’s highly intelligent killer. That said, V is a much-needed relief for film buffs who are on the lookout for fresh entertainment. V is not the popcorn movie that we deserve but the one we need right now.

Hindustan Times – V needed better writing. Even the twists are so predictable that you wish they came with at least some element of surprise. Instead, a lot of focus has gone into making the film look needlessly stylish.

Firstpost – The entire drama revolves around the battle of egos between these two characters, played by Nani and Sudheer Babu, and who is going to emerge as the winner. So far, so good. But then, the biggest villain of the film is the world and the characters that inhabit it.

V, produced under the banner of Sri Venkateswara Creations, was initially scheduled to hit the theatres in March. But the release date had to be postponed owing to the coronavirus outbreak. Had it been like a normal situation, we bet, fans would have rushed to watch first day first show of V in theatres.

(The above story first appeared on LatestLY on Sep 05, 2020 02:14 PM IST. For more news and updates on politics, world, sports, entertainment and lifestyle, log on to our website latestly.com).