Twitterati is currently upset with Vishal for comparing Kangana Ranaut to a legend that freedom fighter Bhagat Singh was. 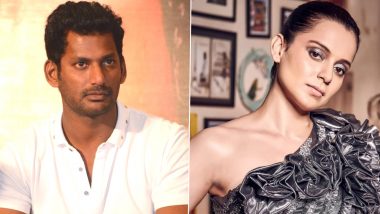 While Kangana Ranaut is currently waging a war against Maharashtra government and CM Uddhav Thackeray, South actor Vishal has come out in her support. He earlier tweeted his support for Kangana Ranaut and drew similarities between her conflict with the government to that of freedom fighter Bhagat Singh's war against the British tyranny. His comparison, however, has yielded hardly any support from Twitterati as they are busy slamming him online for his usage of words.

Twitterati is currently upset with Vishal for comparing Kangana Ranaut to a legend that Bhagat Singh was. While one has the freedom of expression in our country, netizens believe comparing Kangana's personal war to a legend like Bhagat Singh and his sacrifices for the country is simply senseless. Twitter is currently flooded with tweets against Vishal and his comparisons and here's how Twitterati are reacting to it. Check out some of the tweets. Kangana Ranaut vs BMC: Maharashtra CM Uddhav Thackeray Is No More Welcome in Ayodhya, Says VHP.

Only comment @VishalKOfficial need to know more about Bhagat Singh the legend, cheap @KanganaTeam and the cowardly central govt that is hiding behind her to divert people from economic mess, covid, china and GST.....#TamilSpeakingIndian #HindiTheriyadhuPoda #HindiImposition

The Comparison is Disrespectful

You can support someone based on her views but comparing a person to the legend who sacrifice his life for our country at a tender age is not only unacceptable but also the ultimate disrespect to the sacrifice. Please don't use the sacrifice for your political gain. #BhagatSingh

Netizens are Losing their Cool

Dude really??? You are comparing kangana with bhagat singh.what a horrible man

Yes, Bhagat Singh had thrown tweet bombs in assembly and British govt gave him Y security cover till his last breath. RSS was with the government at that time as well. Totally same thing ! https://t.co/LNhGL0OsvT

GETTING OUR PRIORITIES RIGHT

While the Indian media was busy talking about Kangana Ranaut, the "new Bhagat Singh" according to some, 96,551 people got Corona-infected and 1,209 died yesterday.

Isn't it time we got our priorities right? https://t.co/RMeBYx6b1h

"Dear Kangana, Hats off to your Guts, you have never thought twice to voice out what is right & what is wrong. It wasn't your personal issue, but even then facing the wrath of the Government, you stayed strong which makes it a very big example. It's something Similar to what Bhagat Singh did in 1920s. This will set an example for people to speak against the Govt when something is not right and not necessarily being a Celebrity but also as a common Man. Freedom of Speech (Article 19) Kudos to you, I Bow to you," Vishal had tweeted while extending his support to the Queen actress.

Kangana's office was partly demolished by BMC officials for having illegal constructions and while High Court had put a  stay order to their demolition activity, enough damage was done already. Now, Kangana claims she doesn't have enough money to spend on the restoration and repair work and will continue working from the same demolished construction.

(The above story first appeared on LatestLY on Sep 11, 2020 12:07 PM IST. For more news and updates on politics, world, sports, entertainment and lifestyle, log on to our website latestly.com).