Sushant Singh Rajput Was Not on Good Terms With His Father, Claims Shiv Sena's Sanjay Raut

Shiv Sena MP Sanjay Raut on Monday reiterated that late Bollywood actor Sushant Singh Rajput was not on good terms with his father. 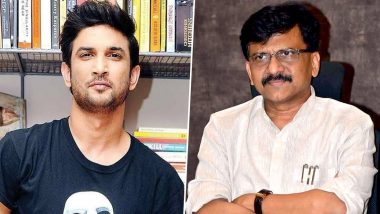 "It is true, how many times Sushant went to Patna to meet his father? I have sympathy for his father, but there are many things that will come to the surface," Raut said when asked about the Saamana editorial wherein he stated that Sushant was not on good terms with his father KK Singh. The Shiv Sena leader in his weekly column claimed that the Mumbai Police investigation revealed a strained relationship between Sushant and his father. Sushant Singh Rajput Case: Maharashtra Government Submits Investigation Report in SC, Hearing on August 11.

Raut also said that Sushant's death is being used by some for political gains, which is "sickening". Terming it as a conspiracy against the Maharashtra government, he alleged that politics is being done in Bihar and Delhi over Sushant's death. Sushant Singh Rajput was found hanging at his Bandra residence on June 14. The Centre has handed over the probe to the Central Bureau of Investigation on the Bihar government's request.

"The kind of politics being done in Bihar and Delhi over Sushant Singh Rajput's death, I believe a conspiracy is being hatched against the Maharashtra government. Mumbai Police is a capable force and is trying its best to bring out the truth," Raut said.

(The above story first appeared on LatestLY on Aug 10, 2020 10:43 AM IST. For more news and updates on politics, world, sports, entertainment and lifestyle, log on to our website latestly.com).