Abhay 2 Promo Out: Ram Kapoor Is The Surprise Element and Star Attraction Of This Web-Series (Watch Video)

Ram Kapoor comes across as the super-smart villain in Abhay 2 and Kunal Kemmu, as Inspector Abhay Pratap Singh of Special Task Force, is tasked with breaking Ram's character's mystery and why he committed some heinous crimes. 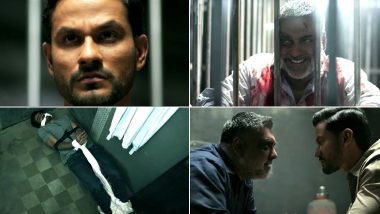 Zee5 has launched the trailer of their next - Abhay 2. And the star of the trailer appears within the first few seconds itself - Ram Kapoor. Yes, you read the correct name. Ram Kapoor comes across as the super-smart villain in Abhay 2 and Kunal Kemmu, as Inspector Abhay Pratap Singh of Special Task Force, is tasked with breaking Ram's character's mystery and why he committed some heinous crimes. Kunal Kemmu Shares a Beautiful Picture With His 'Personal Little Sunshine' Inaaya Naumi Kemmu Ahead of Father's Day 2020 (View Post).

The show, unlike season 1, seems like it will revolve around only Ram Kapoor being the central antagonist, while Abhay (Kunal) tries to crack open the mystery behind some horrifying crimes, not to mention, a puzzle in the form of Rm's drawings in the jail cell. A Suitable Boy Adaptation: Ram Kapoor, Shahana Goswami and Vivek Gomber on Board for Mira Nair’s BBC One Series

While Kunal impressed in Abhay 1 and we have high expectations from him in Abhay 2, Ram Kapoor, as the surprise element of a bad boy, has us intrigued too. In an Indianexpress report, Ram was quoted as saying, "The promo is just a glimpse. The character is going to leave the audience stunned. He has no name. He is like an unsolved riddle, an extremely mysterious psycho killer/super-villain. The writing is so perfectly interlaced with the character, giving it multiple layers. It was a tough play for me, unlike anything I have done before, and I even managed to scare myself a bit. God willing, the fans would give me as much love for this as they’ve given me all these years." The date for Abhay 2's release has not yet been announced.

(The above story first appeared on LatestLY on Jun 18, 2020 05:12 PM IST. For more news and updates on politics, world, sports, entertainment and lifestyle, log on to our website latestly.com).