Aly Goni recently took to his Twitter and conducted a #AskAly session with his fans. When a user asked him about his reaction if someone random would flirt with girlfriend Jasmin Bhasin, this is what he replied. Read on. 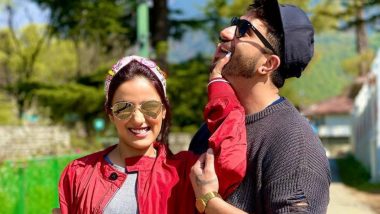 Bigg Boss 14 was a huge success. Even though it was Rubina Dilaik who won the reality show, other contestants also created quite an impact. Along with fights and drama, the latest season also saw love blooming on national Television. Be it Eijaz Khan-Pavitra Punia or Aly Goni-Jasmin Bhasin, fans adored the lovey-dovey moments between these pairs. Having said that, on March 27, Aly took to Twitter and interact with his legion of fans via the #AskAly session. The actor tried to answer almost every question, but when a fan asked about his girlfriend Jasmin Bhasin, he showed the possessive side. Priyanka Chopra Jonas Has an Apt Answer for a Fan Who Is Upset About Not Being Invited to Her Wedding.

During the session, when a user quizzed Aly that will he go the jealous way if someone random flirts with Jasmin? To which, Aly in a joking way replied, "Koi mere saamne karke toh dikhaye." Well, we bet this answer of Goni will definitely make Jasmin go all aww. As who does not want a loving and serious partner like Aly. Damn cute!!! Jasmin Bhasin and Aly Goni To Feature in Five Music Videos After Tera Suit Song Success (Watch Video).

Meanwhile, before entering Bigg Boss 14, JasLy (Jasmin and Aly) were just friends, but it was the reality show that brought the two closer and now they cannot live without each other. After BB 14, the duo was also seen in a music video titled Tera Suit which was a big hit. Stay tuned!

(The above story first appeared on LatestLY on Mar 27, 2021 06:08 PM IST. For more news and updates on politics, world, sports, entertainment and lifestyle, log on to our website latestly.com).