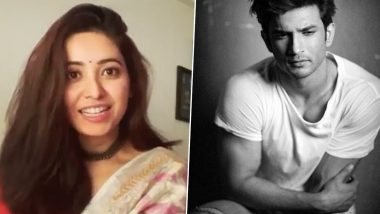 Actress Asha Negi has given a befitting reply to a social media user who trolled her for not posting anything about the late Sushant Singh Rajput on social media. On Monday, Asha uploaded a video about her experience of working with Sushant in the TV show "Pavitra Rishta". "It was a life-changing experience to be a part of #pavitrarishta. Working with the best cast and crew, this show was bound to be the no. 1 show at the time..I received a lot of love from the fans as Poorvi and still cherish my days working with the team," she wrote. Sushant Singh Rajput’s Sister Shweta Singh Kirti Bids a Final Farewell, Filled With Love and Positivity, to Her Dear Brother (View Post)

However, Asha's video did not go down well with one particular user. "You never spoke or mentioned anything for Sushant," the user questioned. Asha noticed the comment and responded: "Is it that important to follow the trend and mention about how you feel on social media? Can a person not grieve in private?" Incidentally, although colleagues who featured in the same show, Asha and Sushant never worked together in the show because she joined "Pavitra Rishta" much after Sushant left the show. Bhumi Pednekar to Feed 550 Impoverished Families as Tribute to Sushant Singh Rajput

It was a life changing experience to be a part of #pavitrarishta🌸Working with the best cast and crew, this show was bound to be the no. 1 show at the time..I received a lot of love from the fans as Poorvi and still cherish my days working with the team..💜 Now you can binge watch all episodes of Pavitra Rishta on ZEE5 for free. Download the app and watch now. #PavitraRishtaOnZEE5 @zee5shows

She was the new face of the serial after one of its leaps. Sushant Singh Rajput was found hanging at his residence on June 14. His post mortem has stated that the actor committed suicide.

(The above story first appeared on LatestLY on Jun 29, 2020 07:16 PM IST. For more news and updates on politics, world, sports, entertainment and lifestyle, log on to our website latestly.com).