BB14 begins on a languorous, convoluted note, with uninteresting, almost one-dimensional contestants. The show is airing on Colors TV and also streaming on Voot Select. 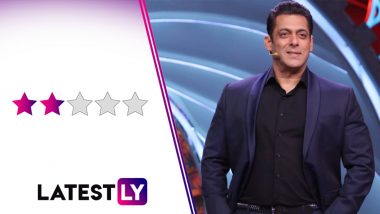 Bigg Boss 14 Grand Premiere Review: The first episode of Bigg Boss 14 was aired on October 3, and it is everything you expect it to be and more. And when I meant 'more', I meant more runtime, for the episode ran for about three and a half hours! That's too much of Salman Khan's bad jokes, contestants amping up their femininity and masculinity to ridiculous levels and former contestants - Sidharth Shukla, Gauahar Khan and Hina Khan - behaving like college seniors trying to rag freshers. Bigg Boss 14 Contestants List: Meet the Housemates Who Entered Salman Khan’s Reality Show.

In short, the grand premiere of Bigg Boss 14 reflects exactly the kind of mediocrity that Indian television has been reduced to these days. To be fair to the show, I haven't been an avid watcher of Bigg Boss, only getting to check a few episodes for job requirements. So being not in the wave of Bigg Boss discussions, I am not among the one already into the spirit of seeing celebs (and wannabe ones) squabble their way about domestic chores in a house with a swimming pool. In a country that is already chaotic with brittle unity, we just need more shows that see people fighting with each other, don't we?

Ah anyway, the first episode of Bigg Boss 14 already showed us who is going to be the big fighter. That, ladies and gentleman, is Nikki Tamboli - a surname that gives its host, known for writing "Selfish" song, make lame tambola jokes. Her ticket to fame is supposed to be being a part of South movies. She was in films like Kanchana 3 and Chikati Gadilo Chithakotudu. And from her very first appearance, she irks the hell out of us, trying to be the vacuous bimbette of the show, breaking into tiffs for spilt food and snoring. Giving her company in being empty-headedness is Naagin fame, Jasmin Bhasin, though she acts less vacuous, which also goes for the two 'rejects', Rubina Dilaik and singer Sara Gurpal. Only television actress Pavitra Punia seems to behave like normal. Bigg Boss 14 Grand Premiere Recap: Salman Khan’s Reality Show Sees Gauahar Khan, Sidharth Shukla, Hina Khan as Toofani Seniors, Nikki Tamboli’s TIFF With Eijaz Khan, Rahul Vaidya’s Secret Task.

That's the problem I saw with how Bigg Boss wants its viewers to see the contests - the women as bimbos and the men as alpha males. Otherwise, how would you explain Nishant Singh Malkhani trying to act up the macho-giri, or Rahul Vaidya keeping on saying that he doesn't mind seeking romance. Having seen previous interviews of some of the contestants, I don't think they behave the way I saw them in the premiere episode.

Also, what was the idea of Gauahar, Sidharth and Hina asking Abhinav Shukla to ramp-walk in his trunks? Sure, he didn't adhere to that demand, but he still had to do the walk without his shirt. If the person is not comfortable doing so, which Abhinav clearly looked to be, why the insistence to do so? Bigg Boss 14 Episode 1 Precap: Jasmin Bhasin Gets into Verbal Argument with Nikki Tamboli, Radhe Maa Gets Preachy (Watch Video).

I really felt for Eijaz Khan, a veteran among the newbies, who clearly looks out of place, at least in the first episode. And what the heck was that Radhe Maa thing all about? Why is Bigg Boss insisting on promoting fake godpeople through their show, in a country already gullible on blind faith and beliefs? Wasn't it enough to push the roguish misogynist Swami Om on us?

Maybe, things would have been less irritating if the episode was shorter and less convoluted. The whole 'selected' and 'rejected' shtick is added only to keep things twisted - I am pretty sure all those who are 'rejected' will enter the show at some point. You are not going to deny the viewers a chance to see Nishant and Sidharth have a verbal spat, after the former called out latter's abusive behaviour (without knowing Sidharth is in the house), are you?

As for Salman Khan, he is his usual jokes - cracking bad jokes, not adhering to contestants' fan requests and pulling up their legs. And still, anything with Bhai in a jovial mood, feels like the show's better parts.

All said and done, Bigg Boss 14 is still better than watching news channels like Republic and Times Now get to shouting matching and fabricating gossip for news. At least, in case of Bigg Boss, we know it's entertainment even if that's not exactly heartening!

BB14 begins on a languorous, convoluted note, with uninteresting, almost one-dimensional contestants. The show is airing on Colors TV and also streaming on Voot Select.

(The above story first appeared on LatestLY on Oct 04, 2020 06:09 PM IST. For more news and updates on politics, world, sports, entertainment and lifestyle, log on to our website latestly.com).