Bigg Boss 14: Hina Khan Recaps Her Stay In The House And Calls Herself Sher Khan To Warn The Contestants (Watch Video)

The new season of Salman Khan's Bigg Boss will begin today and Hina Khan would be seen grilling the contestants. How do we know? She does say in this video that they will face the Sher Khan. 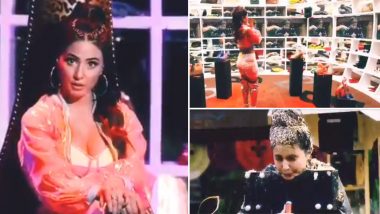 It's that time of the year when Bigg Boss begins. The success of this show proves that being nosy and giving others lectures on morals, ranks highly on our to-do list, even if it's unsolicited. That's exactly the reason why this show continues to be absurd and preposterous with every season. Today is the premiere of its 14th season and a lot of old contestants will join in on the fun. Hina Khan is obviously a part of the list. A video of what the actress would be seen doing tonight has been released and it sounds as if she is calling herself Sher Khan. Bigg Boss 14: Hina Khan Slips Into her Retro Mode for the Premiere Night Episode (View Pics)

Hina Khan recaps her time in the house which was one of the most disgusting seasons of the show. She then moves to warn the contestant that they will meet the Sher Khan when they arrive. Our guess is she is talking about herself.

Here's a wild thought though. Salman Khan, who is the host of the show, was supposed to star in a movie called Sher Khan. Just saying!

(The above story first appeared on LatestLY on Oct 03, 2020 12:32 PM IST. For more news and updates on politics, world, sports, entertainment and lifestyle, log on to our website latestly.com).