Bigg Boss 14: Rakhi Sawant Writes ‘I Love You Abhinav’ All Over Her Body; Refers to Herself As the Actor’s Girlfriend

Rubina calls her step as 'cheap entertainment', while Aly Goni tries to make her understand that this is not the way to express love. Vikas Gupta is also seen talking to Rakhi and telling her that this may look very bad 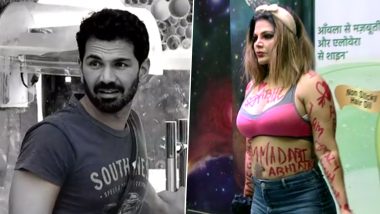 Another day inside the Bigg Boss 14 house and another drama created by Rakhi Sawant. The actress has been single-handedly entertaining the audience with her weird antics and it is fun to see how she manages to get on everybody's nerves with her behaviour. Earlier, she was headlining the news when she tore Rahul Mahajan's dhoti during a task and today, the actress has become the topic of discussion for her increasing fondness towards Abhinav Shukla. Bigg Boss 14: Captain Rakhi Sawant Has Turned Into Rubina Dilaik and Abhinav Shukla’s ‘Chamchi’, Feel Fans.

Abhinav Shukla, who is married to fellow Bigg Boss contestant Rubina Dalaik, often tries to ignore Rakhi. In today's episode, he is assigned to wash the dishes with her. While he remains quiet, Rakhi says that Rubina won't be able to sleep today since they are working together. Rubina hears this and slams the actress for saying rubbish things. To teach her a lesson, Rakhi writes 'I Love Abhinav' all over her body and will be seen roaming around in the house like this to show that no one can keep Abhinav away from her.

Rubina calls her step as 'cheap entertainment', while Aly Goni tries to make her understand that this is not the way to express love. Vikas Gupta is also seen talking to Rakhi and telling her that this may look very bad to which she replies, "Kaise kharab lag sakta hai, yeh meri body hai. Kisi ki body ko rent pe leke nahi likha hai." Abhinav also goes into a shock after seeing her. Arshi reminds Rakhi that she will ruin her relationship with Rubina and Abhinav if she continues to do this. The Main Hoon Na actress pays no heed to that as well.

Vikas asks how will Abhinav's wife feel seeing her in this manner. Rakhi responds by saying, "Wife ko kaisa lagega, mai kya karu? Girlfriend (referring to herself) ko kaisa lagega." Rubina is agitated but says that this stunt will only damage Rakhi's image and hence she doesn't care what she does. She asks Abhinav to ignore Rakhi completely and not encourage her at all. Bigg Boss 14: Are Arshi Khan and Rakhi Sawant Desperate to Win Abhinav Shukla’s Love?

Earlier, Arshi Khan had also professed her love for Abhinav. She was seen making comments like "tum mere ho" (you are mine), "I will destroy you" and "I can even make you papa". Arshi was also heard saying: "Abhinav is mine. Even if Rubina fights with me and asks me to look into her eyes, I am ready to do that but Abhinav is mine."

Undoubtedly, Abhinav has been one of the more popular men in the house this season. From being a helping hand in the kitchen to being the macho man flaunting his chiselled body by roaming around shirtless in the house and showcasing his chivalrous side to housemates, Abhinav has crafted a positive image. He is quite the "ladies' man" in the show.

(The above story first appeared on LatestLY on Jan 25, 2021 08:47 PM IST. For more news and updates on politics, world, sports, entertainment and lifestyle, log on to our website latestly.com).