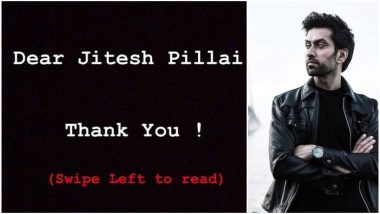 Journalist Jitesh Pillai’s blatant comment on Hina Khan’s appearance at the Cannes Films Festival 2019 has upsurged a wave of hatred against him. Many celebrities from the film and television industry, along with Hina’s many fans, have called out the journalist and slammed him on social media. TV actor Nakuul Mehta also took to his Instagram to post an open letter, addressing it to Jitesh. In the letter, the actor has criticised the VIP culture and partial hierarchy of entertainment world. Hear, Hear! Salman Khan Claps Back at the Unsavoury Comment Made on Hina Khan’s Cannes Appearance.

In a long letter addressed to Jitesh, the Ishqbaaaz actor wrote, “No, Chandivali is not the problem. Far from it. If Cannes is the home of movies, then Chandivali Studios is also home for thousands and thousands of hardworking artists and technicians in Mumbai-both from the television and the film industry. It’s where dreams are sown, baby steps are taken towards greater glory, higher artistic ambitions. For a lot of us Chandivali is still our Cannes and we are absolutely proud of it.”

He criticised him and blamed the country plagued by the caste system. He talked about the VIP culture and it has not spared even the world of entertainment. “Film > TV > Theatre. An evaluation created out of pure smugness with zero idea about what it means for an artist to perform. Was Brando a lesser actor on stage? Would he be a lesser actor on TV or an app? No. But I guess, if he did TV in India, God save him,” added the actor.

Nakuul even mentioned Game of Thrones in his letter as one of the most iconic show in the history of television. He wrote, “In a time when Game of Thrones, a TV series, has become the biggest pop culture phenomenon world over, it’s very snooty to look down upon television as the unwanted cousin at the party. The lines are blurring between film, television & digital. Those old ideas about stardom and value are falling ‘dead’ like the Night King. It’s the new reality. The new media landscape.” Chandivali Studios to Cannes 2019: Hina Khan Is a ‘Proud Outsider’.

He further thanked the journalist for uniting the actors in raising their voices against bigotry. “Thank you, if for nothing else but for shaking our collective conscience to wake up and stand up for the respect our work demands,” continued the actor.

Nakuul also had a message for his fellow colleagues and artists. He wrote, “And to you, my fellow comrades, artists & colleagues, the responsibility lies with us more than anybody else to ably represent our industry. We have survived, and even thrived, so far in a highly competitive industry, dealing with our own issues and challenges – both artistic and personal. There has to be a larger sense of ownership & belonging which we must embrace as soldiers of an industry which we are extremely proud of.”

Journalist Jitesh Pillai had earlier mocked Hina for being a TV actress and making it to Cannes Film Festival. The journalist posted an Instagram story stating quiet an offensive remark for the actress as he wrote, "Cannes has suddenly become Chandivali studios kya?" On Friday, he took to his social media account to share his apology in an Instagram story.

(The above story first appeared on LatestLY on May 19, 2019 04:42 PM IST. For more news and updates on politics, world, sports, entertainment and lifestyle, log on to our website latestly.com).