Famous Lives of Bollywood Wives made you cringe? Did you think why Karan Johar even made a show like that? Well, the filmmaker answers all the questions here. 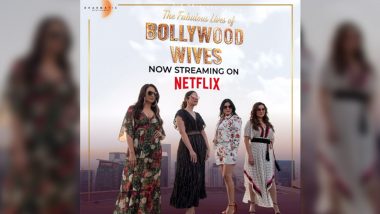 Fabulous Lives of Bollywood Wives is a show that has been unanimously slammed not just by the critics but the viewers as well. This is like a perfect example of every publicity is good publicity because Karan Johar and the 'wives' made it amply clear on the show that they don't care what people think about it. The same sentiment is evident from Karan Johar's latest Instagram post which celebrates the series' mammoth popularity on Netflix in various countries. The catchy bit is, Johar mentioning, "Yes you can cringe it ( but still binge it) yes you’re allowed to wonder why we even made it." Fabulous Lives of Bollywood Wives Review: Bhavna Panday and The Men Try To Redeem This Inane Excuse Of A Show (LatestLY Exclusive)

Clearly, Johar is fine with all the brickbats the show received for being extremely pretentious and devoid of any substance. The series is number 1 on Netflix in India, Bangladesh, Pakistan, Sri Lanka and UAE. Check out Karan Johar's post below it gets even more interesting.

Karan mentions, "We as a team are OK with that! As long as you watch the show and are not indifferent to us!" This makes us believe the filmmaker and the wives, Maheep Kapoor, Seema Khan, Bhavna Panday and Neelam Kothari Soni might just be excited to plan a season II.

(The above story first appeared on LatestLY on Dec 02, 2020 01:29 PM IST. For more news and updates on politics, world, sports, entertainment and lifestyle, log on to our website latestly.com).