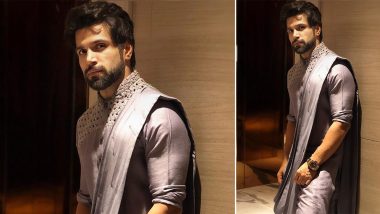 Actor Rithvik Dhanjani who was a prominent part of Khatron Ke Khiladi's special Made in India has opted out of the game show midway. Well, we called Rithvik prominent because, in his first week itself, Rithvik proved himself to be the best performer and went on to win the coveted 'Champion' jacket after beating the likes of Karan Patel and Karan Wahi. However, the actor has stepped out of the show for the sake of his and his co-contestants' safety. Rithvik Dhanjani: 'If Given a Chance I Can Do Khatron Ke Khiladi Over and Over Again'.

A source told Bombay Times, "Rithvik was doing well on the show and was among the top contenders. However, due to a personal commitment, he had to travel outside the city for a day. Keeping the rules and regulations in mind during the pandemic, he opted out of the show for the safety of his co-contestants and crew. It was a tough call to take, but there was no other way." Khatron Ke Khiladi Made In India: Jasmin Bhasin, Nia Sharma, Karan Patel, Rithvik Dhanjani Get Ready To Face Their Fears (Watch Videos).

Rithvik too confirmed the news and told the daily, "Yes, it’s true. The times we are living in are difficult and safety comes first." In an earlier interview, when quizzed about being a part of Khatron Ke Khiladi: Made In India, Rithvik had revealed how he set environment was safe. "Safety is our priority and everyone roams around in PPE. It almist looks like we are in a corona ward. I feel safe here," Rithvik had revealed. But looks like the actor's journey was only until he took home the 'champion' jacket.

(The above story first appeared on LatestLY on Aug 10, 2020 04:47 PM IST. For more news and updates on politics, world, sports, entertainment and lifestyle, log on to our website latestly.com).