Actor Mukul Chadda plays a pivotal role in the upcoming web series Sunflower, a quirky murder mystery set in a housing society. He shares anecdotes of weird rules that often exist in housing societies of the city. 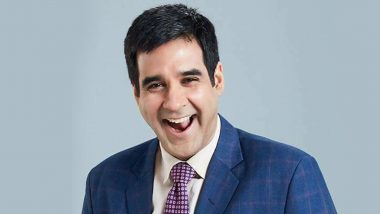 Actor Mukul Chadda plays a pivotal role in the upcoming web series Sunflower, a quirky murder mystery set in a housing society. He shares anecdotes of weird rules that often exist in housing societies of the city. Recalling early memories of searching for a rented apartment when he came to Mumbai, Mukul says after a point it became a game in his mind as to what weird rule he would get to hear from the next housing society. Mukul Chadda Speaks on His Role in ZEE5’s Sunflower, on OTT Revolution and a Fave Series He Wants to Adapt (LatestLY Exclusive).

"There are housing societies where dogs are not allowed, bachelors are not allowed. In one society I was told by the landlord that they do not encourage any Bollywood members in the society and so, as I am an actor, they wouldn't give the apartment to me. I walked out of another housing society because of their discriminatory attitude towards a specific religious group. Banana Bread: Rasika Dugal Says Filming for Short Film with Hubby Mukul Chadda in Lockdown Was Challenging and Fun

Although they had nothing against me, if a housing society holds such a negative attitude towards people based on their religious identity, I would rather not stay there," Mukul told IANS. However, according to him, the most remarkable things happen to young live-in couples!

"As we know it is tough to get a house for live-in couples. There are many who carry fake marriage certificates to rent a house. A friend couple rented a place and told the society they are married. Eventually, they got married but on their wedding day, they could not invite any of their neighbours because, in the eyes of the society, they were officially already married! They went out, got married and came back to the building like a regular couple, not dressed like newlywed couples!" he signed off, laughing.

The web series "Sunflower" revolves around a murder that takes place in a housing society. The show also features Sunil Grover, Ranvir Shorey, Girish Kulkarni, Shonali Nagrani, Sonal Jha, and Ashish Vidyarthi among others, and releases on Zee5 on June 11.

(The above story first appeared on LatestLY on Jun 04, 2021 09:31 PM IST. For more news and updates on politics, world, sports, entertainment and lifestyle, log on to our website latestly.com).