We look for interesting content on the OTT platforms every week, so that audience can relax and binge-watch what they prefer and like while sitting back at home. Let's quickly take a complete look at the series and movies releasing on the OTT platforms on this Christmas week. 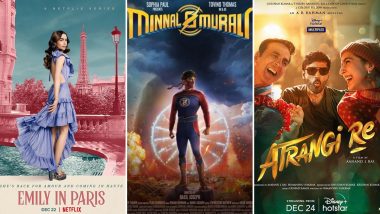 We are almost at the end of the year 2021, with that we are stepping on the fourth week of December 2021, which is the Christmas week. With all excitement on peak, there are several interesting series and movies releasing on OTT platforms like Netflix, ZEE5, SonyLIV, Disney+ Hotstar and HBO Max. Talking about the biggest release of the week it would be Atrangi Re, which will release on December 24 on Disney+ Hotstar. Helmed by Aanand L. Rai, the movie will unveil a story of a Tamil boy, who will meet a girl from Bihar, and that will lead to a beautiful love story. A non-linear tale of two romances which runs in similar way just from different timelines. The movie stars Akshay Kumar, Sara Ali Khan and Dhanush in key roles. Atrangi Re Trailer: Akshay Kumar, Dhanush, Sara Ali Khan Make a Curious Love Triangle in This Aanand L Rai Directorial (Watch Video).

Another big release of the week would be Minnal Murali, which will drop on Netflix on December 24. The superhero movie is directed by Basil Joseph. The film revolves around a young tailor from a small town in Kerala who acquires special powers after he gets struck by lightning on a Christmas evening dressed as a Santa Claus. The Malayalam flick stars Tovino Thomas, Guru Somasundaram and Aju Varghese, among others. Another interesting release of the week would be Emily in Paris Season 2, which is all set to stream on Netflix from December 22. This web show is a perfect watch for teenagers, specially for girls as it shows how Emily Cooper struggles to succeed in the workplace while she's in search for love. The second season is surely going to arrive with more treats. The comedy series features Lily Collins, Ashley Park, Philippine Leroy-Beaulieu, Lucas Bravo, Samuel Arnold, Camille Razat, and Bruno Gouery. Minnal Murali Trailer: Tovino Thomas As Desi Superhero Fights With His Foe in This Actioned Packed Malayalam Film! (Watch Video).

(The above story first appeared on LatestLY on Dec 19, 2021 05:02 PM IST. For more news and updates on politics, world, sports, entertainment and lifestyle, log on to our website latestly.com).