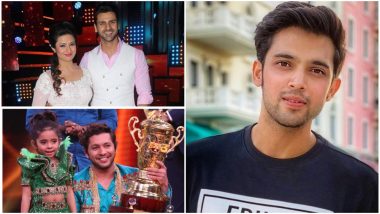 From Parth Samthaan to Divyanka Tripathi, here's a look at the TV newsmakers of the week. (Photo Credits: File Photo)

Another Sunday is here and it's time that we take a look at the top 5 news of the week. While a lot has been happening in the telly land this week, here are 5 things that you can’t afford to have missed this week. Telly industry witnessed a lot of high-voltage drama this week. From Vivek Dahiya joining Divyanka Tripathi in hosting the grand premiere of Salman Khan’s reality show Nach Baliye 9 to Parth Samthaan refusing to do a film with Bollywood actress Sonakshi Sinha in Khandaani Shafakhana, here is a round-up of TV newsmakers! Srishty Rode, Priyank Sharma, Subuhi Joshi – Take a Look at the TV Newsmakers of the Week

Rs 403 Crores! That’s How Much Salman Khan Will Earn From Bigg Boss 13

Bigg Boss, that is all set to start its run for its thirteenth year, will take over the silver screens on September 29 and Salman Khan to return as the host of Bigg Boss 13. Ever wondered, how much does Salman charge for the show? Latest reports suggest that Salman is charging Rs. 31 crores per weekend (Saturday-Sunday). Yes, the actor is charging only 403 crores in total for a span of 26 episodes. In 2018, Salman was reportedly earning Rs 14 crore per episode. The reason behind charging this much is because the actor has a deal to offer for the makers. Looks like, after shows like Nach Baliye 9 and The Kapil Sharma Show, Salman is now willing to collaborate with the Bigg Boss makers (Endemol Shine & Colors Tv) for a new show. Excited much?

Nach Baliye 9, which is being produced by Salman Khan, is coming soon! While TV actress Jennifer Winget and comedian Sunil Grover will be hosting the upcoming season of Nach Baliye, an online entertainment portal reported that Nach Baliye 8 winners Divyanka Tripathi and hubby Vivek Dahiya will host the grand premiere of the show. Confirming the same, Divyanka told the website, "Vivek and I are doing it together for the pre-launch episode. I always wanted to host with Vivek. I'm very happy that we got this opportunity in Nach which has been a very important part of our life."

Parth Samthaan Refused to Romance Sonakshi Sinha in Khandaani Shafakhana for THIS Reason?

Kasautii Zindagii Kay 2 actor Parth Samthaan has hit the headlines for turning down a movie offer. Reportedly, the actor was offered a role in Sonakshi Sinha's upcoming film Khandaani Shafakhana as her love interest; however, the actor refused to do it. Apparently, the actor was not happy with the role time of the character, and hence, thought of giving it a miss.

Ek Thi Rani Ek Tha Raavan's lead actress Manul Chudasma has been ousted from the show overnight. According to a report in a leading daily, since the show is gearing up for a major generation leap, the makers decided to replace the actress owing to a track change and a complete transformation of the lead female character. Talking to the daily, the producer Suzana Ghai said, "We had no issues with the actress at all. The show is taking a big turn and we wanted someone, who looks sensuous, stylish and justifies the twist we are bringing in the show. The track requires Rani to outgrow her middle-class beginnings and take on a new avatar."

Sony TV’s much-celebrated dance reality show for kids Super Dancer 3, which premiered on December 29, 2018, has concluded on Sunday (June 23) with the announcement of its winner and it is none other than the 6-year-old Rupsa Batabyal. The expression queen of Super Dancer Chapter 3 walked away with the coveted trophy and Rs 15 lakh prize money. The other 4 finalists who made it till the end were Saksham Sharma, Tejas Verma, Jaishree Gogoi and Gourav Sarwan. Stay tuned!

(The above story first appeared on LatestLY on Jun 30, 2019 08:00 AM IST. For more news and updates on politics, world, sports, entertainment and lifestyle, log on to our website latestly.com).