Parth Samthaan’s ‘Apna Time Aayega’ Reference From Gully Boy For Himself and Niti Taylor Is Nothing But The Truth!

The lad just acknowledged their career climb that has only gone up after Kaisi Yeh Yaariyaan. 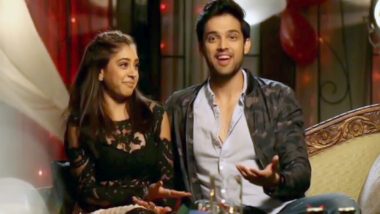 Kaisi Yeh Yaariyaan on MTV was what turned actors Parth Samthaan and Niti Taylor’s careers around completely. While Parth had shone because of his stint in Channel V’s Best Friends Forever?, Niti was a part of shows like Bade Acche Lagte Hai and Gulal, before bagging Kaisi Yeh Yaariyaan opposite each other. And the duo soon became one of the television industry’s much loved and vouched for pairs. Their fan base became humungous and there was no turning back for them. Rejoice! Parth Samthaan and Niti Taylor’s Kaisi Yeh Yaariaan 3 Is Back on TV – View Pic

However, as much as they were in the news for their on-screen chemistry, they were grabbing headlines for their off-camera bond, which was nothing but rocky. Parth and Niti never really got along and their aversion led to lots of reports in the media about their frequent fall-outs. However, the duo was strictly professional and never caused issues for their makers, which is a very rare occurrence in the industry (off camera animosity between actors has always created hurdles for show makers). Khatron Ke Khiladi 9: Parth Samthaan Is Proud Of Vikas Gupta And So Are We!

However, when Kaisi Yeh Yaariyaan 3 was announced, both Parth and Niti put aside their differences and as they say- the rest is history. Today, the duo shares a warm bond and also keeps posting and updates with each other, which only makes their fans glad.

Currently, Parth is busy with Kasautii Zindagii Kay 2 and Niti recently bagged Ishqbaaz. And while both are busy with their respective projects, Parth shared a fan-made edit of the two of them from Kaisi Yeh Yaariyaan 3 and acknowledged how their ‘time’ started on July 21, 2014 and how it is still going on.

He was obviously referring not only to their careers but also to Kaisi Yeh Yaariyaan 3 and how it is being telecast on MTV right now. He also wished Niti on her stint in Ishqbaaz. Yea, they’ve been acknowledging each other’s achievements, leaving their fans all heart-eyed.

(The above story first appeared on LatestLY on Jan 29, 2019 04:26 PM IST. For more news and updates on politics, world, sports, entertainment and lifestyle, log on to our website latestly.com).