Qubool Hai 2.0: Surbhi Jyoti and Karan Singh Grover Are Back As Zoya and Asad, Show to Air on ZEE5 (View Pic)

Zee TV's hit show Qubool Hai is back with its second season. Retaining its OG leads, Surbhi Jyoti and Karan Singh Grover starrer daily soap is all set to stream on ZEE5. Excited? As we are for sure. Read on. 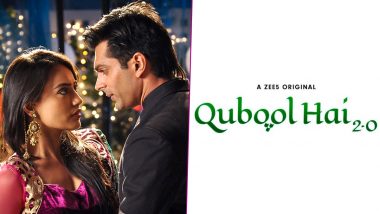 Zee TV's hit show Qubool Hai is returning with its second season. Yes, we are not kidding here. As Surbhi Jyoti and Karan Singh Grover starrer daily soap is all set to stream on ZEE5. Titled as Qubool Hai 2.0 the latest season of the popular drama will see the original leads playing the role of Asad Ahmed Khan and Zoya Farooqui. This is definitely quite an exciting news for all fans of the serial as once again Surbhi-Karan will be hypnotising the audience with their acting prowess. However, as the show is going all-digital, this time it'll only be a 10-episode series on the OTT platform. Qubool Hai 2.0: Karan Singh Grover and Surbhi Jyoti to Reportedly Reunite For Second Season.

Earlier, reports were that Surbhi and Karan have re-teamed for the project, but nothing was official. However, now the cat is finally out of the bag. Well, apart from the leads, the daily soap will also see Arif Zakaria and Mandira Bedi playing important roles. Qubool Hai 2 is directed by Ankush Mohla and Glen Barretto. An elated Surbhi and KSG shared the official poster/logo of the serial on Instagram. Reportedly, the shooting of the serial is said to begin this month. Churails: ZEE5 Announces First Pakistani Original Series; Asim Abbasi Directorial to Premiere on August 11.

Check Out The Logo Of Qubool Hai 2.0 Below:

After the announcement of season two, Karan in an official statement said, “Qubool Hai did break stereotypes eight years ago and once again it will start conversations. The backdrop of the story will center around the lead couple. This time, the stakes are much much higher for Asad and Zoya and the scale is international. But the show will also reminisce the ethos of the original series to maintain the legacy of Asad and Zoya.” Stay tuned!

(The above story first appeared on LatestLY on Nov 26, 2020 09:04 PM IST. For more news and updates on politics, world, sports, entertainment and lifestyle, log on to our website latestly.com).