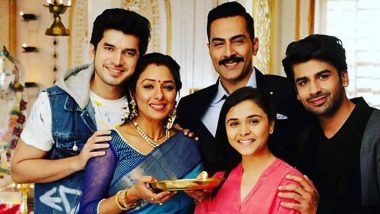 Star Plus' show Anupamaa, a Rajan Shahi production, that was in the news for being actress Rupali Ganguly's comeback vehicle, was all set to launch on March 16, 2020. The show's promos, as well as the timeslot, were announced. However, given the COVID-19 lockdown and the decision to halt shoots of film and television projects, it was reported that the show's launch had been delayed. But, if reports are to be believed the show that stars Rupali Ganguly and Sudhanshu Pandey in the lead roles, is all set to go on-air soon. Coronavirus: Rupali Ganguly Comeback Anupamaa’s Launch Delayed, Timeslot to Be Replaced By Yeh Rishta Kya Kehlata Hai's Hour Long Episodes.

As per a report in SpotboyE, the makers and the channel have decided on July 13, 2020 for the show's launch. However, the show's original timeslot of 9 pm will see a change. For those who are still clueless, Anupamaa is the Hindi remake of the Bengali show Sreemoyee that airs on Star Jalsha. Good Samaritans Rupali Ganguly and Jaya Bhattacharya Feed Stray Dogs In Filmcity (Watch Video).

In the wake of corona virus spread we have taken a call to wait for the launch of our show #anupamaa In the interest of safety of everyone associated... Till further notice ..be rest assured we will be coming soon to ur TV sets... Till then take good care n be safe JAI MAHAKAAL 🙏🙏🙏 #family from @anupamaa_fanpage @rajan.shahi.543 @sudanshu_pandey @rupaliganguly @muskanbamne @kedaraashish @paras_kalnawat #anupamaa @starplus

Anupamaa stars Alpana Buch, Arvind Vaidya, Paras Kalnawat, Muskan Bamne, Ashish Mehrotra and Additi Gupta, alongside the lead pair Rupali and Sudhanshu. Back when the show was delayed, Rajan Shahi, in an interview, had revealed, "Yesterday, the channel and I mutually decided that we should not air Anupamaa from tomorrow. Now that we know that no shoots will take place between March 19-31, we might as well delay the launch of the show. We didn't want a hurried short term launch. When shooting resumes with everybody's consent, we will decide the new date of its launch." Well, with the makers having a few episodes in the bank and with shoots resuming, we're sure the show will hit the TV screens soon.

(The above story first appeared on LatestLY on Jul 03, 2020 09:00 PM IST. For more news and updates on politics, world, sports, entertainment and lifestyle, log on to our website latestly.com).