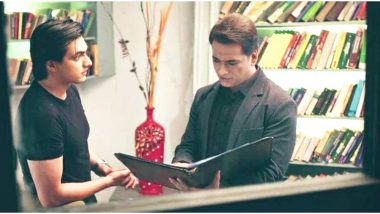 The shooting for the hit TV soap Yeh Rishta Kya Kehlata Hai has come to a halt. As per reports, one of the supporting actors, Sachin Tyagi, has tested positive for COVID-19 and so have a few other crew members. The cast and crew had only recently celebrated Ganesh Chaturthi on the sets. As per a report by SpotboyE, Sachin, who essays the role of Manish Goenka on the drama, developed a fever. After getting tested, his results came positive for the novel coronavirus a day before. A source added, "After which a few other crew members who also felt symptoms, got themselves tested." Karan Tacker Puts The Rumours To Rest, Denies Being COVID-19 Positive.

The source further added, "Some of them came negative and some positive. As of now, more members of the show including actors have got their tests done and now they are waiting for the results.”

Earlier, Kushal Tandon also developed symptoms of the disease on the sets of his show. He underwent a swab test, the results of which are awaited. Kushal Tandon Undergoes Swab Test for COVID-19 After Developing Symptoms, Results Awaited.

Before that, the shooting for the show Kasautii Zindagi Kay was paused after main lead Parth Samthaan, who plays Anurag, was tested positive for the disease. He recovered and returned to the sets to resume shoot after 15 days. Many celebs like Amitabh Bachchan, Abhishek Bachchan, Aishwarya Rai have recovered from the disease. Music composer, Wajid Khan passed away due to co-morbidities after contracting the disease.

(The above story first appeared on LatestLY on Aug 24, 2020 04:21 PM IST. For more news and updates on politics, world, sports, entertainment and lifestyle, log on to our website latestly.com).