Taarak Mehta Ka Ooltah Chashmah Episode Update: Popatlal Realises The Need For A Life Partner Now More Than Ever During the Lockdown 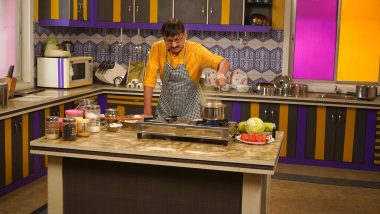 The upcoming episode of Taarak Mehta Ka Ooltah Chashmah will see Gokuldhaam Society’s most eligible bachelor venting out his desire to get married despite the lockdown. After Champak Chacha called the Mahila Mandal and heard out each one of them, he then calls Popatlal. A Patrakar by profession, the lockdown has transformed Popatlal from a writer to becoming a fulltime bawarchi too. Taarak Mehta Ka Ooltah Chashmah Episode Update: Gokuldham Society Members Tell Their Tales of Woe To Champak Chacha.

Of course, in his otherwise routine life he had to cook for himself but at least back then, he had the choice of eating out, and meeting with colleagues and other people. However now, being stuck at home, his everyday routine has made him want a companion like never before. Taarak Mehta Ka Ooltah Chashmah: Lockdown Restlessness Catches On To Gokuldhaam Society.

The mundane monotony of everyday household tasks has made Popatlal crave for a life companion even more tha he has ever wanted and realised. While he has been doing every single household chore since he lives alone, it is making him long for someone to share his time with.

He explains his predicament to Chachaji and says that he is okay with taking care of all the chores by himself, but doing it just for him is making his life very dull and tasteless. Even his work has stalled and whatever little he has to do, he does from home, leaving him with no other way to socialize with anyone new. After hearing him out Champakklal, feels bad for Popatlal and decides that something needs to be done immediately, and not just for Popatlal but for everyone in Gokuldhaam Society.

Will Champak Chacha and his ideas be the relief that Gokuldham residents are looking for, during the lockdown? What ideas does Chachaji have in his mind? There’s much to see and learn from the next few episodes of TMKOC and while all this may sound tragic, Gokuldhaam Society’s equation with tragedy almost always converts into unexpected incidents of comedy, always!! Are you excited? We know we are.

(The above story first appeared on LatestLY on Oct 17, 2020 02:58 PM IST. For more news and updates on politics, world, sports, entertainment and lifestyle, log on to our website latestly.com).