WandaVision has been entertaining fans for the past nine weeks and recently had its finale. And as expected, fans of the show could not keep calm and poured their heart out on the micro-blogging site. Check out the reactions here. 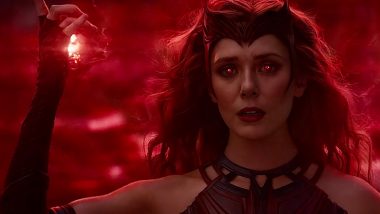 WandaVision has been entertaining fans for the past nine weeks and recently had its finale. And as expected, fans of the show could not keep calm and poured their heart out on the micro-blogging site. Talking about the last episode, it was high on action and surprises and there's no doubt that fans will miss the show dearly. Right from the emotional scenes to the end of Wanda's arc, all these things made the finale episode a huge hit. Wandavision Finale: Disney+ Crashes, Leaving Twitterati Fuming!

The two main points of discussion on the internet are Wanda and Agatha Harkness fight and also the scene where the Scarlet Witch appears in her full form. Yes, Twitterverse and in love with the finale of WandaVision, but at the same time cannot wait for season two. Not just this, they've also given a thumbs up to the visual effects. Check out the reactions below. WandaVision Episode 8 Recap: From Agatha Harkness’ Origins to Chaos Magic, 8 Things We Learnt From the Most Heartbreaking Episode of Elizabeth Olsen’s Marvel Series (SPOILER ALERT).

So so proud to see Elizabeth Olsen getting the well deserved appreciation..#WandaVisionFinale #WandaVision pic.twitter.com/VfXDfyLY94

Can we talk about this for a sec, Hayward shot to kill at kids this mf going to meet Mephisto personally#WandaVisionFinale #WandaVision pic.twitter.com/YOXr7jKPlc

“more powerful than the sorcerer supreme.”

i can’t wait to see her again in doctor strange 2 ugh pic.twitter.com/aPPzwn75CK

THE CINEMATIC PARALLELS. IT RUNS IN THE FAMILY BABY. pic.twitter.com/RGm3GaBVEA

WANDA TRANSFORMING INTO THE SCARLET WITCH I WILL NOT STOP TALKING ABOUT IT FOR WEEKS SO PLS PREPARE YOURSELVES #WandaVisionFinale pic.twitter.com/CTwPBoRM7a

Well, after looking at the above reactions, if you have not yet watched WandaVision's finale episode, we would insist you, to go and see it now.  Definitely, MCU has served a roller-coaster last episode that is worth investing your time in. The show streams in India on Disney+ Hotstar Premium. Stay tuned!

(The above story first appeared on LatestLY on Mar 05, 2021 04:07 PM IST. For more news and updates on politics, world, sports, entertainment and lifestyle, log on to our website latestly.com).