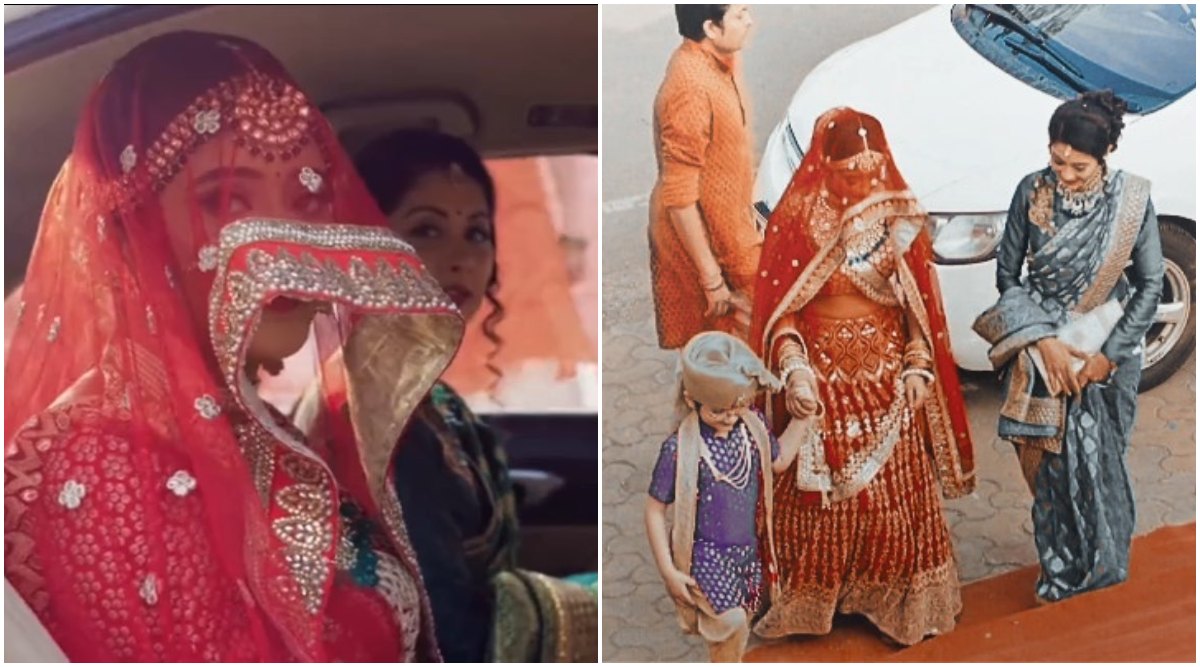 In yesterday’s episode of Yeh Rishta Kya Kehlata Hai, a guilt-ridden Vedika marks an exit from Kartik and Naira’s life. Kartik and Naira are excited when Suhasini organizes their wedding at a temple. In tonight’s episode, we see Naira’s dress gets stuck in the bolt and she pleads to the bolt to leave her dress else it will tear. There, Kartik’s dress gets a scratch. At the temple, Suhasini, Manish and others ask the temple priest why he didn’t tell them that animals easily enter the temple. The priest shows them a notice and tells them that they have already written the note. Yeh Rishta Kya Kehlata Hai January 16, 2020 Written Update Full Episode: Guilty Vedika Finally Leaves And The Families Prepare For Kartik and Naira’s Wedding.

On the other hand, Kartik asks his driver to drive him fast to the dress shop as he has to purchase a new dress. Here, Naira along with Gayatri, leaves for the temple. At the temple, Naksh, Samarth and others decorate the temple for Kaira’s marriage. Afterwards, Kartik meets a man at the shop who wears has worn the same dress as Kartik. Kartik asks him not to worry as his one torn thus he is here to change it. Kartik’s driver misunderstands the other man as Kartik and drives him to the temple.

Everyone waits for Kartik and Naira. Naira comes and Kairav gets happy seeing her. Here, another man reaches the temple in place of Kartik. Meanwhile, Kartik gets locked in the washroom. Kartik decides to escape from the washroom. There, Surekha gets happily excited to welcome Luv and Khush. Here, Kartik struggles to reach the temple. The other man thinks that they are from the girl’s side and is happy seeing the arrangement. Suhasini tells Naira not to see Kartik’s face before getting married. Naira wonders why Kartik is so silent and decides to talk with him after wedding rounds. Kartik runs towards the temple. Yeh Rishta Kya Kehlata Hai's Shivangi Joshi Follows In Ex Co-Star Hina Khan's Footsteps, To Walk The Cannes Film Festival Red Carpet in 2020.

Afterwards, Goenkas along with the person who they think is Kartik, dance with Naira at the temple, while Suhasini touches the unknown person and feels strange. The Priest asks Kartik and Naira to exchange garlands. Suhasini searches for the garland but does not find it. All get tensed as now what will they do. Suhasini says that is why she told not to get married so far in the temple as they cannot arrange for the garland now. Suddenly the other man who is dressed as a groom tells Suhasini that the idea of getting married in the temple was of elders only. All get shocked to hear as the voice sounds different from Kartik. Naira opens the sehra of the groom and gets shocked seeing someone else standing instead of Kartik at the groom’s place.

In the next episode, Kartik struggles to reach Naira. At temple, Naira inquires the person and asks him to tell where is Kartik?