The school education department has opened the inviting portal candidates who seek to change their preferences according to the existing vacancies. 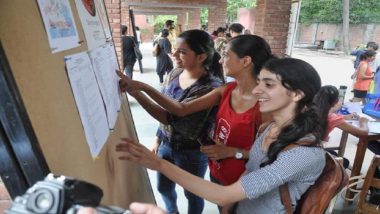 The First Year Junior College (FYJC) cut-off for the second round of admission was released last week on the respective institute’s website. This announcement was delayed in order to fulfil High Court’s demand through the Centralized Admission Process (CAP) to allot only 25 per cent or 45 per cent of the total seats at minority institutions depending on their quota. As the students wait for the third round of admission, the school education department has opened the inviting portal candidates who seek to change their preferences according to the existing vacancies. The students can do the needful on mumbai.11thadmission.net.

The list of current vacancies which was released by the education department on July 23, revealed that only 1 lakh seats are available for over 1.43 lakh candidates for the third round of allotment. According to reports, the third merit list will be announced on July 26 at 11:00 am. The Indian Express reported that around 42,000 seats are available in the general category of which 5,016 are in the Arts stream, 24,637 in Commerce and 11,832 in Science. In addition, 80,000 seats will be available to students not availing quotas only after the CAP rounds end. However, top preferred colleges have very few seats left for the third round.

There are no seats available in KC College barring seven in the aided section for the commerce stream. Mithibai is left with only two seats in the Science stream, NM College has only seven seats, and St Xavier’s has no seats in the Arts stream. On the other side, candidates whose names did not appear in the second merit list despite scoring high marks, took out a march last week with their parents urging the education department to allot the quota seats on merit.

(The above story first appeared on LatestLY on Jul 24, 2018 12:08 PM IST. For more news and updates on politics, world, sports, entertainment and lifestyle, log on to our website latestly.com).