Farmers Protest: Traffic Jam at Delhi-Gurugram Border, Due to Checking of Vehicles by Police; View Pics 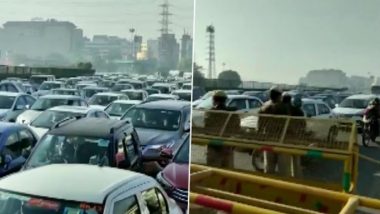 Delhi: Traffic jam at Delhi-Gurugram border, due to checking of vehicles by police, in view of farmers' protest march.

They broke through police barricades at several places on the Punjab-Haryana border to march towards the national capital to protest against the recently enacted farm laws.

Over the past 12-15 hours, farmers moved closer to Delhi, prompting Delhi Police to scale up the deployment of security personnel, stationed sand-laden trucks and water cannons and using barbed wire for fencing at the Singhu Border to prevent the protesters from entering the city.

(The above story first appeared on LatestLY on Nov 27, 2020 10:09 AM IST. For more news and updates on politics, world, sports, entertainment and lifestyle, log on to our website latestly.com).