Aadhaar Myth Buster: Can Someone Hack Your Bank Account if They Get to Know Your 12-Digit Unique Aadhaar Number? Here’s the Fact

Aadhaar and its services offer a unique opportunity to people of the nation to avail welfare schemes that are being announced by the government. People usually furnish their Aadhaar card while opening bank account as an identity proof. However, there are questions regarding the safety and security of Aadhaar that cross our minds. 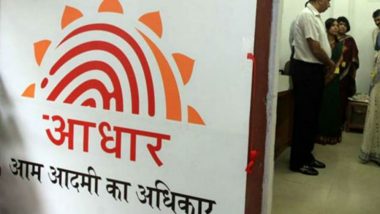 New Delhi, October 14: The Aadhaar number is a 12-digit random number issued by the Unique Identification Authority of India (UIDAI) to all the residents of India. Any individual, irrespective of age and gender, can enroll to obtain the unique identity number. Aadhaar and its services offer a unique opportunity to people to avail government schemes. Aadhaar is widely used as an identity proof for opening a new bank account, getting a new SIM card, for any documentation process needed by companies, mobile number verification among other things. People usually furnish their Aadhaar card while opening a new bank account as an identity proof. However, there are questions regarding the safety and security of Aadhaar that cross our minds. Aadhaar Card: How to Download E-Aadhaar by Using Registered Mobile Number Online at eaadhaar.uidai.gov.in.

As an individual furnishes the 12-digit random Aadhaar card, one thinks what if their bank account is hacked or their personal details are leaked. But, worry not! The UIDAI, on its official website, said that no one can hack into your bank account if they get to know your Aadhaar number. The UIDAI said just as by merely knowing the ATM card number, no one can withdraw money from the ATM machine; by knowing your Aadhaar number alone, no one can hack into your bank account and withdraw money. "Your bank account is safe if you don’t part with your PIN/OTP given by banks", it said. How to Verify Mobile Number, Email ID Linked on Aadhaar Number Online on UIDAI Website uidai.gov.in.

The UIDAI said there has not been a single case of financial loss due to Aadhaar and urged the people of the nation no to fall a prey to any such misinformation regarding hacking of back account with Aadhaar details.  It added saying that Aadhaar number alone cannot be used for banking or any other service. Aadhaar is a unique and robust enough to eliminate duplicates and fake identities. It may be used as a basis/primary identifier to roll out several Government welfare schemes and programmes for effective service delivery thereby promoting transparency and good governance.

(The above story first appeared on LatestLY on Oct 14, 2020 02:56 PM IST. For more news and updates on politics, world, sports, entertainment and lifestyle, log on to our website latestly.com).