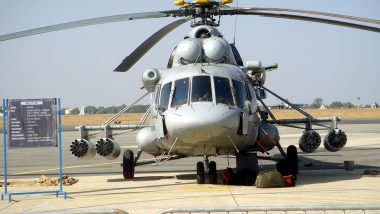 The chopper took off from the Sulur Airbase and was proceeding to Wellington when it crashed. Others who were in the chopper were Brigadier L.S. Lidder, Lieutenant Colonel Harjinder Singh, Naik Gursewak Singh, Naik Jitender Kumar, Naik Vivek Kumar, Naik B. Sai Teja, Havaldar Satpal and pilots. IAF Mi-17V5 Helicopter Crash: CDS General Bipin Rawat Rushed to Hospital, 13 Dead; Here's What We Know so Far.

The Mi-17V5 is a Russian-made military transport helicopter. It is a variant of Mi-8 helicopters. Notably, these helicopters were used for deploying soldiers, arms transport and fire support. In 2008, India signed a contract with Russia’s Rosoboronexport for the delivery of 80 Mi-17V5 helicopters. Reportedly by 2013, all the 80 choppers were delivered to the IAF.

Starboard sliding door, searchlight and emergency floatation system and parachute equipment have been fitted to the helicopter. It has a maximum speed of 250 km/ hr. The Mi-17 V5 chopper can fly at a maximum altitude of 6,000 metres and has a standard range of 580 km. Its range can be extended to 1,065 km if fitted with two auxiliary fuel tanks.

Mi-17 V5 chopper is also armed with S-8 rockets, Shturm-V missiles and a 23 mm machine gun. PKT machine guns and AKM submarine guns are also fitted to the chopper. It is equipped with onboard weather radar and an autopilot system. It also has a glass cockpit fitted with multi-function displays and night vision equipment. The Mi-17V5 helicopter has a maximum take-off weight of 13,000 kg.

(The above story first appeared on LatestLY on Dec 08, 2021 05:08 PM IST. For more news and updates on politics, world, sports, entertainment and lifestyle, log on to our website latestly.com).