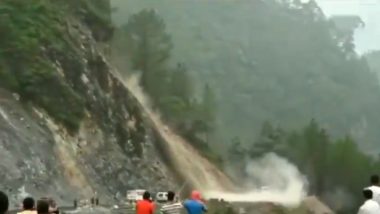 Chamoli, July 29: A massive landslide occurred Badrinath national highway in Kodiya area of Chamoli district on Tuesday evening due to incessant rains in the region. According to reports, the national highway is blocked at multiple locations because of the falling debris. Operations to clear the highway is currently underway. The video of the landslide also surfaced on social media.

Video of The Landslide:

#WATCH Uttarakhand: A landslide occurred at Badrinath national highway in Kodiya of Chamoli district last evening, due to incessant rainfall. The national highway is blocked at multiple locations due to falling of debris. Operations to clear the route is underway.(28.07.2020) pic.twitter.com/gdSLFvvrHx

On Monday also, a massive landslide occurred near Indo-Tibetan Border Police (ITBP) camp in Gauchar town of Chamoli district blocking the Badrinath National Highway. No injury was reported during that landslide. However, the Badrinath Highway was blocked.

Heavy rains lashed several regions of the state in the past few days. On Tuesday, in Pithoragarh district of the state, a woman from Metli village was swept away by swirling waters of Gori river as torrential rains lashed Bangapani sub-division of the district, Sub-Divisional Magistrate (SDM) A K Shukla said. Another woman from Jara Jibli village is missing, he said.

(The above story first appeared on LatestLY on Jul 29, 2020 10:06 AM IST. For more news and updates on politics, world, sports, entertainment and lifestyle, log on to our website latestly.com).