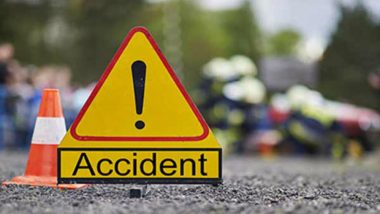 Lucknow, August 20: In a bus accident, 16 people were injured after the bus overturned on Agra-Lucknow Expressway. According to an ANI update, the injured are being treated at PGI Saifai. The bus carrying 45 passengers was en route to Madhubani in Bihar from Delhi.

In another news on Wednesday, a bus with 34 passengers travelling from Gurugram to Madhya Pradesh went missing from Agra. Police rejected reports that the bus was hijacked. The cops informed that the bus was not hijacked, but employees of a finance company took control of the bus over non-payment of EMIs on Wednesday. Agra Bus Hijack Reports Rejected by Police; Cops Say Loan Recovery Agents Seized Bus With 34 Passengers Against Owner's Dues.

16 People Injured After Bus Travelling to Bihar From Delhi Overturns

16 injured after a bus carrying 45 passengers overturned on Agra-Lucknow Expressway. Injured are being treated at PGI Saifai. The bus was enroute to Madhubani in Bihar from Delhi: Etawah SSP Akash Tomar (File pic) pic.twitter.com/f0gBmd9azj

In a tragic incident that took place earlier this year, atleast 14 people died and more than eight people sustained serious injuries as the private bus in which they were travelling collided with a truck here on the Agra-Lucknow Expressway.

(The above story first appeared on LatestLY on Aug 20, 2020 07:32 AM IST. For more news and updates on politics, world, sports, entertainment and lifestyle, log on to our website latestly.com).