The man, upon learning that he was medically fit and not infected by HIV virus, filed a case with the Haridwar consumer forum. 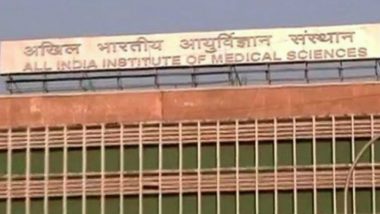 New Delhi, May 7: The All India Institute of Medical Sciences (AIIMS) is known for the quality of its medical care. Patients from far and wide come to the medical facility for getting treatment at the leading medical facility. However, a man from Haridwar was recently given a wrong diagnosis, saying that he is HIV Positive by AIIMS Rishikesh, when that was not the case. 'Munna Bhai' Caught at AIIMS: Man With No Medical Education Poses as Doctor at India's Top Medical Facility for 5 Months, Identified and Handed to Police.

The man, on learning that he was medically fit and not infected by HIV virus, filed a case with the Haridwar consumer forum. The forum then imposed a fine of Rs 60,000 on AIIMS and instructed the medical institute to pay him the amount within a month.

The case is from the year 2014, when a patient named Naseem Ali was referred to AIIMS Rishikesh, after the treatment that he was undergoing at  a private medical hospital failed to yield results. However, the tests conducted at AIIMS Rishikesh showed that the man was HIV positive, reported The Times of India.

But upon the further deterioration of the patient's health, he was taken to a private hospital where he was detected as HIV negative. Then in January 2015, Naseem Ali registered a complaint against AIIMS in the district consumer forum. The consumer court observed that because of the carelessness of AIIMS, the man suffered mental agony.

The Consumer forum then directed AIIMS to pay a compensation of Rs 60,000 within a month. The forum also said that if the hospital fails to do so, it will have to pay the amount at 6 percent annual interest. However, a spokesperson of AIIMS Rishikesh was quoted saying by TOI that the hospital will challenge the order in an upper court as said that the error was a mistake that took place because of documentation process.

(The above story first appeared on LatestLY on May 07, 2019 03:13 PM IST. For more news and updates on politics, world, sports, entertainment and lifestyle, log on to our website latestly.com).