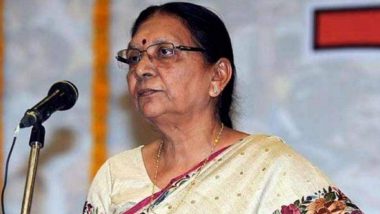 Anandiben, 78, had taken over as the UP Governor in January 2018 after the tenure of Ram Naik had ended. Till mid-2017, she was serving as the Gujarat Chief Minister - the post which she had inherited after Narendra Modi was elected as Prime Minister of India in 2014.

Tandon, the MP Governor, remains in unstable medical condition. He was admitted earlier this month after his health deteriorated. Although the 85-year-old's condition has improved, he continues to remain on ventilator support, said a statement issued by the Medanta Hospital in Lucknow where he is being treated.

There is continuous improvement in the condition of the Governor of Madhya Pradesh, Lal Ji Tandon. He interacted with family members and colleagues but he is still on ventilator support," the hospital said in a statement. "Team of medical experts at Medanta-Lucknow is tirelessly working for best medical treatment," it added.

(The above story first appeared on LatestLY on Jun 28, 2020 10:55 PM IST. For more news and updates on politics, world, sports, entertainment and lifestyle, log on to our website latestly.com).