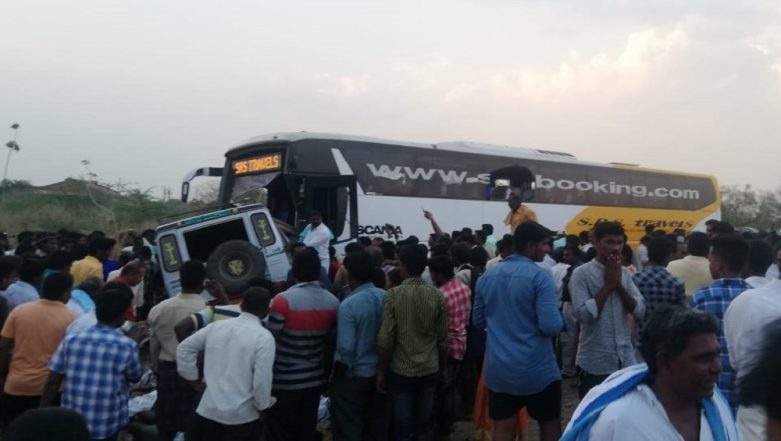 13 people were killed in a road accident in Kurnool. (Photo Credits: ANI)

Kurnool, May 11: In a tragic incident, 13 people lost their lives after two vehicles collided in Veldurthi of Kurnool district of Andhra Pradesh. Several people were also injured in the accident. According to reports, Volvo bus en route Bengaluru hit a transport vehicle coming from the opposite side. Telangana: 15 Killed, 7 Injured After Tractor Falls Into Musi River Canal in Yadadri District.

The injured were immediately shifted to Kurnool General hospital. After getting the information about the accident, police have reached the spot and have started rescue operations. Andhra Pradesh Road Accident: Nine Killed, Four Injured After Bus Hits Auto-Rickshaw in Kurnool.

Earlier in April this year, three people of the same family died and two others were injured after the car in which they were travelling in hit an oil tanker. Meanwhile, in another incident, seven people were killed after a mini-bus collided with a container lorry in Andhra Pradesh’s Anantpur.