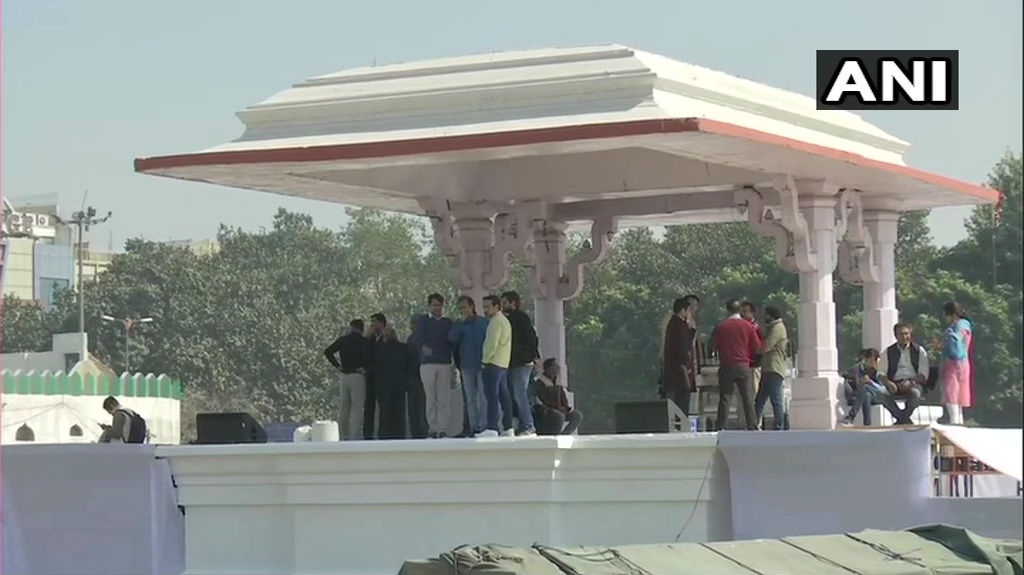 New Delhi, February 15: The sprawling Ramlila Maidan will once again reverberate with sounds of hundreds of people cheering for AAP national convener Arvind Kejriwal who is all set to take oath as the Delhi Chief Minister for the third straight time on Sunday morning.

Kejriwal is scheduled to be sworn-in along with his Cabinet at 10 am, days after the AAP romped to a magnificent victory in the Delhi Assembly election, in which the party won 62 seats in the 70-member House for the second time since 2015. Arvind Kejriwal Swearing-In as Chief Minister: Delhi School Heads Urged to Attend AAP Chief's Oath-Taking Event Along With 20 Teachers.

Ramlila Maidan served as the battleground for the 51-year-old bureaucrat-turned-politician during the India Against Corruption movement in 2011. Million of Indians from all walks of life had thronged the historic ground rallying for a series of measures to tackle corruption during the tenure of the Manmohan Singh-led United Progressive Alliance (UPA), which also included the passage of a Jan Lokpal Bill.While the ground draws its name from the Ramlila that is staged there every year, AAP's association with the place dates back to 2011-12.

The venue holds significance in the life of Kejriwal and the birth of the AAP -- or the 'Common Man Party' -- whose interests the activist-turned-politician wanted to represent.The ground, located in the heart of the national capital, can accommodate over a lakh people.

The venue has witnessed several events which shaped the landscape of Indian politics, be it former prime minister Lal Bahadur Shashtri coining the famous 'Jai Jawan, Jai Kisan' slogan in 1965, socialist leader Jayaprakash Narayan addressing a gathering during the 'Total Revolution' movement in the 1970s, and several anti-Congress leaders coming in unison to form the Janata Party just after Emergency in 1977.

But, the India Against Corruption movement, which was led by social activist Anna Hazare and his deputy, Kejriwal, at Ramlila ground, is considered a watershed moment for Indian politics in recent times. The crusade, included Manish Sisodia and Gopal Rai, are all founder members of AAP, which made an impressive debut in the 2013 Delhi Assembly elections. It also included Yogendra Yadav and Prashant Bhushan, who later left AAP after a fall out with Kejriwal. Delhi Assembly Elections Results 2020: Three Reasons Why Arvind Kejriwal's Aam Aadmi Party Won Despite BJP Resurgence.

Delhi: Preparations underway for the swearing-in ceremony of Chief Minister-designate Arvind Kejriwal at Ramlila Ground. He will take oath as CM for the third time on February 16. pic.twitter.com/jBUnTqFg1S

Interestingly, this is also the third consecutive time when Kejriwal will be sworn-in at the historic ground. He had earlier taken the oath of office in 2013 and 2015 at the same venue.Ramlila Maidan has indeed turned the life of Kejriwal around -- first as an activist and then becoming the youngest Chief Minister of Delhi to take office.

When Kejriwal was sworn-in for the second time in 2015, he had promised an end to VIP culture, vowed to eliminate corruption and continue to stand for the aam aadmi, much to the raucous cheers of thousands of supporters. Notably, the oath ceremony was held on February 14, coinciding with Valentine's Day. Fast forward to 2020, Kejriwal, who will receive a hero's welcome at the sprawling ground, has urged the people of the city to witness "the son of Delhi" taking oath on Sunday

.The AAP nearly repeated its 2015 performance, sweeping the Assembly polls, garnering 62 of the 70 seats in the face of a high-voltage campaign by the BJP, which fielded a battery of Union Ministers and Chief Ministers in its electioneering, spearheaded by Home Minister Amit Shah. The BJP marginally improved its tally, managing just eight seats from its 2015's tally of three seats. The Congress failed to open its account in the second successive election.

The AAP's stunning triumph came in the backdrop of anti-Citizenship Amendment Act (CAA) protests being held at several places in Delhi including at Jamia Millia Islamia and Shaheen Bagh, which the BJP had used as a poll plank in its campaign.In his victory speech at the AAP headquarters here, Kejriwal said that the Assembly polls' results marked the beginning of a "new kind of politics" and asserted it was the victory of the Delhiites and not his.

Earlier on Wednesday, Sisodia extended an invitation to all to attend the swearing-in ceremony. "Delhi's son Arvind Kejriwal and the new government under his leadership will take oath on February 16 at Ramlila Maidan. I appeal to all of you to reach there by 10 am to bless your son and encourage him," he had tweeted.