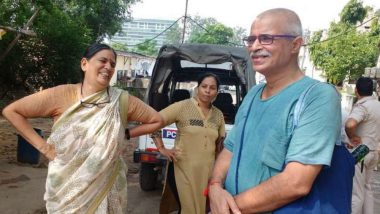 New Delhi, September 24: The Supreme Court on Thursday asked Bhima Koregaon case accused Sudha Bharadwaj's counsel if she already has a strong case on merit then why was her bail plea moved on medical ground.

The apex court then declined to entertain Bharadwaj's bail plea and dismissed it as withdrawn. Bharadwaj moved the top court challenging a Bombay High Court order, which dismissed her plea to get interim bail on medical grounds amid the ongoing pandemic.

A bench of Justices U.U. Lalit and Ajay Rastogi asked Vrinda Grover, counsel for Bharadwaj, why a regular bail plea has not been filed. Grover replied it was pending before the High Court. Bhima Koregaon Case: Jyoti Jagtap, Sagar Gorkhe, Ramesh Gaichor of Kabir Kala Manch Arrested by NIA.

Justice Lalit cited the high court where it was mentioned that her medication was in order. Grover submitted: "I only seek your indulgence to get checked. These tests cannot happen in the jail hospital."

Justice Rastogi pointed out that she was examined by the jail authorities in August. Grover disputed this and read out the medication given to her client in jail. She added that her client has been in custody for nearly 2 years and even charges have not been framed and also no incriminating evidence found against her.

Justice Rastogi then asked Grover: "If you have a good case on merits, then why don't you file a regular bail application?

Grover argued that her client has co-morbidities, which is an issue in the backdrop of the ongoing pandemic, and also there are two diseases which she has developed while in custody.

Grover also urged the court to grant her client interim bail to get a cardio profile, lipid profile and kidney check-up. Justice Lalit said the medical condition is not stable and it keeps changing, therefore on this account, you can move the court again. The bench told Grover that she may choose to withdraw the plea, or it will be dismissed.

(The above story first appeared on LatestLY on Sep 24, 2020 05:12 PM IST. For more news and updates on politics, world, sports, entertainment and lifestyle, log on to our website latestly.com).