BMC Announces 10% Water Cut in Mumbai, Thane From June 27 Due to Low Rainfall

The BMC has requested citizens to use water cautiously stating that the rainfall in June has been about 70 percent less this year when compared to previous years. 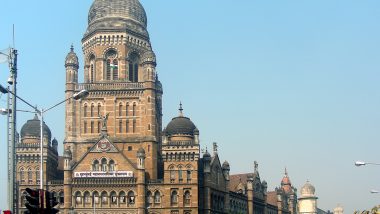 Mumbai, June 26: The Mumbai civic body on Friday announced a 10 percent water cut from June 27 in view of inadequate rainfall during the month of June 2022. According to officials from the civic body, the water stock in the seven lakes that supply water to the city has dipped below 10 percent.

According to a report in the Indian Express, besides Mumbai and suburbs, the 10 percent water cut will also be for the Thane and Bhiwandi municipal corporations and some villages. Sidhu Moose Wala's SYL Song That Clocked 27 Million in Two Days Is No Longer Available on YouTube.

On the other hand, even CIDCO (City and Industrial Development Corporation) has announced a 25 percent water cut from June 27 in areas where it supplies water.

This 10% water cut will also be applicable to areas in Thane and Bhiwandi Municipal Corporation which receive water supply from BMC.

We urge Mumbaikars to use water judiciously, in view of this situation and kindly co-operate. (2/2)

The BMC has requested citizens to use water cautiously stating that the rainfall in June has been about 70 percent less this year when compared to previous years. "10% cut in water supply is being implemented in the BMC jurisdiction area from 27 June, 2022," the BMC said in a tweet.

Sources from the civic body said that the current stock would last till the end of July. On June 12, the water stock in the lakes was around 13 percent. At present, 1.41 lakh million litre of water stock (1.77 percent) is available. Last year, the water reserve was 15.54 percent at this time.

It must be noted that the BMC provides water supply to the city and its neighbouring areas from seven lakes. These include Upper Vaitarna, Modak Sagar, Tansa, Middle Vaitarna, Bhatsa, Vihar, and Tulsi lakes.

(The above story first appeared on LatestLY on Jun 26, 2022 03:53 PM IST. For more news and updates on politics, world, sports, entertainment and lifestyle, log on to our website latestly.com).