The IMD on Monday sounded a "red alert" warning for Mumbai, Thane and Palghar in view of the cyclonic storm "Nisarga". 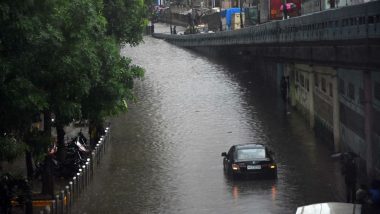 Mumbai, June 1: The Indian Meteorological Department (IMD) on Monday sounded a "red alert" warning for Mumbai, Thane, Palghar, Raigad, Dhule, Nandurbar and Nashik districts in view of the cyclonic storm "Nisarga" that is expected to cross north Maharashtra on June 3. A "red alert" warning means extremely heavy rains will occur at isolated places in Mumbai, Thane and other districts on June 3. Nisarga Cyclone Could be The First Tropical Cyclone in 129 Years to Hit Maharashtra in June.

The "red alert" has been sounded as the depression in the Arabian Sea is slated to intensify into a severe cyclonic storm "Nisarga". According to the IMD, cyclone "Nisarga" will cross north Maharashtra and Gujarat coasts between Harihareshwar in Raigad district and Daman on June 3. IMD Director General Mrutyunjay Mohapatra said that the rainfall in Maharashtra's coastal districts will increase on June 2 and intensify further on June 3.

"Monsoon vortex or cyclonic circulation has formed in the Arabian Sea. As per our predictions, Maharashtra coastal districts like Sindhudurg, Ratnagiri, Thane, Raigad, Mumbai and Palghar will be more affected by it," Mohapatra said. "We are expecting extremely heavy rainfall of more than 20 cm here on June 3," he added. The Director General said that the severe cyclonic storm will have a wind speed of 90-105 kmph when it crosses the coast.

Maharashtra and Gujarat are on pre-cyclone alert as very heavy to extremely heavy rainfall is expected in parts of the states on June 3 and June 4. Due to its influence, the east-central Arabian Sea and south-east Arabian Sea is currently rough. Fishermen in Kerala, Lakshadweep, coastal Karnataka, Goa, Maharashtra, and Gujarat are advised not to venture into the sea till June 4.

(The above story first appeared on LatestLY on Jun 01, 2020 06:59 PM IST. For more news and updates on politics, world, sports, entertainment and lifestyle, log on to our website latestly.com).