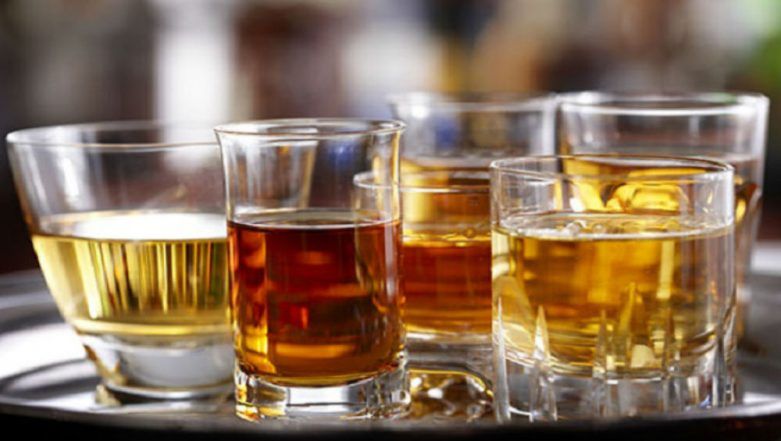 Panaji, July 31: With mining and tourism facing a slump, the Goa government appears keen on literally 'hitting the bottle', to shore up revenues in the state treasury.

Chief Minister Pramod Sawant on Tuesday told the state Legislative Assembly, that the Goa government would soon initiate dialogue with excise officials from neighbouring states, to work out a mechanism which would allow tourists to "legally" return home from a holiday with a larger quota of alcohol bottles. Goa Assembly Passes Tourist Place 2001 Act; Rs 2,000 Fine to be Imposed For Drinking Alcohol, Cooking in Public.

"In any case there are people who are flouting the existing limit by carrying back more than the prescribed number of bottles. We can monetise this trend. Soon we will be speaking to other states in order to seek their consent," Sawant said.

While airlines allow passengers to carry two bottles of IMFL liquor per person, tourists travelling back home by road are routinely harassed by excise officials posted on the other end of the Karnataka and Maharashtra borders.

The reason is that the Goa excise department's permit only allows liquor authorised to be sold in Goa to be transported outside the state only to the union territories of Daman and Diu.

As a result, tourists ferrying even one bottle of alcohol are more often than not required to pay bribes to excise officials or face confiscation of their bottles at border check-posts.

"We want to give permits that allow carrying more than two bottles. Today, they (tourists) are allowed to carry one bottle of IMFL and one bottle of local liquor. We want to promote Goan liquor. Our revenue will also grow," the Chief Minister said.

The state currently earns nearly Rs 500 crore as revenue from various excise fees levied on the sale of liquor in wholesale, retail liquor stores and bars and restaurants in the coastal state. Goa attracts nearly eight million tourists every year.