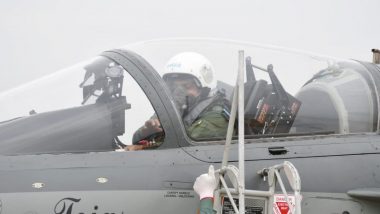 Coimbatore, May 27:  IAF Air Chief Marshal RKS Bhadauria today flew the Light Combat Aircraft Tejas fighter with 45 Squadron at Air Force Station Sulur. He flew the single-seater LCA after a sortie at the induction ceremony of the second squadron of the LCA Tejas fighters in Sulur, Tamil Nadu today.

Bhadauria operationalised No. 18 Squadron ‘Flying Bullets’ at the Sulur airbase on Wednesday. “The squadron will be equipped with light combat aircraft Tejas aircraft and it will be the second IAF squadron to fly Tejas,” an IAF release 'Flying Bullets', Squadron No 18, to be Made Operational at Sulur Airbase, Second IAF Squad to Fly LCA Tejas.

#WATCH Air Force Chief RKS Bhadauria landing the LCA Tejas Aircraft after a sortie at the induction ceremony of the second squadron of the LCA Tejas fighters in Sulur, Tamil Nadu today. pic.twitter.com/WvFvhMstiw

The No.18 Squadron was formed on April 15, 1965, with the motto ‘Teevra aur Nirbhaya’ meaning ‘Swift and Fearless’. The Squadron was flying MiG 27 aircraft before it got number plated on April 15, 2016.  It actively participated in the 1971 war with Pakistan and was decorated with the highest gallantry award ‘Param Vir Chakra’ awarded to Flying Officer Nirmal Jit Singh Sekhon posthumously.

It earned the sobriquet of ‘Defenders of Kashmir Valley’ by being the first to land and operate from Srinagar. The Squadron was presented with President’s Standard in November 2015. "The Squadron was resurrected on April 1 this year at Sulur," the release added.

(The above story first appeared on LatestLY on May 27, 2020 11:59 AM IST. For more news and updates on politics, world, sports, entertainment and lifestyle, log on to our website latestly.com).