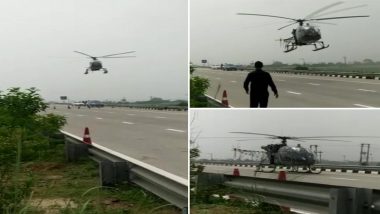 The Cheetah helicopter was proceeding from Hindan to Halwara for a routine task. Approximately 14 NM out of Hindan, helicopter developed a technical snag and carried out precautionary landing on Eastern Peripheral Expressway. "The actions taken by the pilots were prompt and correct. No damage to any property has been reported. Recovery helicopter was launched immediately from Hindan. The helicopter was rectified and recovered back promptly and safely at Hindan," the government said.

On June 21, Indian Army's Advanced Light Helicopter Dhruv made a precautionary landing in Eastern Ladakh area. All passengers and crew onboard the chopper were safe. "The landing was done after the pilot felt that there may be some issue in the chopper and took precautions to land," sources had told ANI. The incident took place amid the ongoing dispute with China and after the violent face-off with Chinese troops in the Galwan Valley.

In April, another Cheetah helicopter made a precautionary landing on the Eastern Peripheral Expressway in Baghpat district of Uttar Pradesh. The helicopter was headed to Chandigarh with medical samples made an emergency landing on Outer Ring Road, after facing a technical snag. The chopper was proceeding from Hindon to Chandigarh on a COVID-19 task of carrying test samples of Leh.

(The above story first appeared on LatestLY on Jun 26, 2020 03:53 PM IST. For more news and updates on politics, world, sports, entertainment and lifestyle, log on to our website latestly.com).