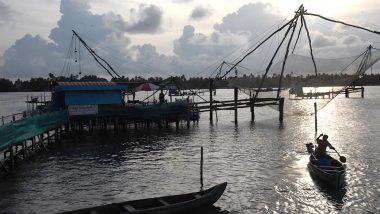 The IMD has issued a red alert for extreme heavy rainfall (over 20 cm) for Kozhikode and Wayanad on Thursday and orange (6 cm to 20 cm) for various other districts in the state. Along with very heavy rainfall, IMD forecast also states that Kerala is likely to witness landslide, flooding, mudslides in the coming days. Orange alerts have been issued in the 5 districts of Malappuram, Kozhikode, Wayanad, Kannur and Kasaragod from August 4 to 8.

On August 5, three people died in Kerala in rain-related incidents as the heavy spells continued for the second day on Wednesday. In the wake of the current weather conditions, the Chief Minister ordered district authorities to remain alert and take all necessary steps to face any eventualities.

The IMD had said that the formation of low pressure areas over North Bay of Bengal and said heavy rainfall is expected in Kerala from August 4 to 8. IMD informed that Mananthavady in Wayanad district recorded the maximum of 15 cm of rainfall, while Munnar and Myladumparain Idukki reported 12 cm and 11 cm respectively. Ottapalam in Palakkad and Vythiri (Wayanad) recorded 10 cm each as per the readings recorded at 8.30 am on Wednesday.

(The above story first appeared on LatestLY on Aug 06, 2020 11:16 AM IST. For more news and updates on politics, world, sports, entertainment and lifestyle, log on to our website latestly.com).