With colleges in Karnataka witnessing protests about being dressed in a certain way over the last one week, Pompei College, at Aikala, about 30km from the city, has said that students must come to college in the prescribed uniform 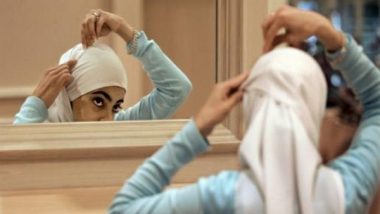 Mangaluru, January 7: With colleges in Karnataka witnessing protests about being dressed in a certain way over the last one week, Pompei College, at Aikala, about 30km from the city, has said that students must come to college in the prescribed uniform. This comes after pictures went viral of some students coming to college sporting saffron scarves to protest against Muslim students wearing headscarves.  Saffron Scarf vs Hijab Row: Balagadi First Grade College Management To Hold Parents’ Meeting in Karnataka

Purushothama kV, principal of the college, said that at the co-ordination committee meeting on Thursday, it was decided that neither headscarves (hijab) nor saffron shawls will be allowed on campus henceforth.

Government colleges in Karnataka are allowed to frame their own dress codes for students.

According to a report in The Times of India, the meeting was attended by leaders of both communities, ex students, members from the governing council, representatives from the joint director's office, police department and panchayat. The decision of the governing council that met early in the day was conveyed to the members. Those who attended the meeting agreed with the college's decision that only prescribed uniforms will be allowed.

The principal said that Muslim students had been wearing headscarves inside the classroom since five years, and nobody had raised an issue.

However, on Tuesday about 34 students came with saffron shawls draped around their neck, without submitting any memorandum or request to the principal or the management.

"When I asked them if there was any specific reason for them to come in shawls, like if they were going to Sabarimala, they said that if Muslim students are going to come in headscarves, they will come in saffron shawls he said.

Local organisations are reportedly supporting the students. A Bajrang Dal leader had allegedly warned the college that Hindus should be allowed to wear saffron shawls, if Muslims are allowed to wear headscarves.

The classes were conducted as usual with a section of students wearing saffron shawls and the Muslim girls headscarves. The college has around 335 students.

On December 31, the government Pu college for girls in Udupi was witness to a similar controversy after six Il PU students, supported by the Campus Front of India, accused the principal of not allowing them to wear the hijab inside the classroom. In their two-page complaint, the girls, led by their families and Muslim organisations, alleged that the principal of their college wasn’t allowing them to wear hijabs in the classroom. They argued that when students from other religion are allowed to wear bindi and bangles, why can't they wear the hijab.

(The above story first appeared on LatestLY on Jan 07, 2022 02:21 PM IST. For more news and updates on politics, world, sports, entertainment and lifestyle, log on to our website latestly.com).