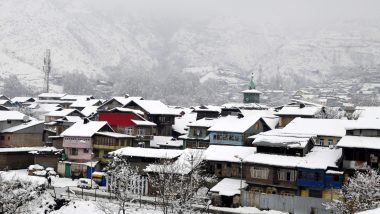 New Delhi, January 2: The Himalayan region which comprises of Jammu and Kashmir,  Uttarakhand and Himachal Pradesh are set to experience heavy snowfall and rainfall this week due to a western disturbance, the India Meteorological Department (IMD) said. In its all India weather bulletin, the IMD said that light to moderate rainfall and snowfall is expected over Western Himalayan region during January 4-6 with its peak intensity on January 4 and 5, 2021.

The IMD said that the current weather conditions is due to the western disturbance as a cyclonic circulation lies over Afghanistan and adjoining central Pakistan. "It is likely to move slightly eastwards to central Pakistan & neighborhood during next 24 hours and remain practically stationary there during subsequent 3-4 days", the IMD said.

(The above story first appeared on LatestLY on Jan 02, 2021 07:49 PM IST. For more news and updates on politics, world, sports, entertainment and lifestyle, log on to our website latestly.com).