Republic Day 2021: Fundamental Rights And Duties of Indian Citizens, Everything You Need To Know About the Constitution of India

The written Constitution is thus the ‘fundamental law’ of a country. Thus, it is the wealth of command, control and checks-and-balance, in the form of accurate-information, enshrined in the Constitution of India. As enshrined in this most sacred text of the nation, every Indian on Republic Day also promises to uphold their duties and responsibilities. 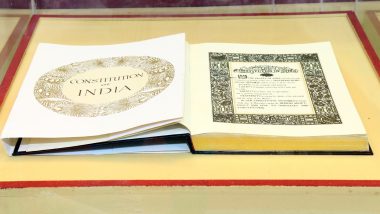 India is all set to celebrate its 72nd Republic Day on Tuesday. Every year on January 26, the country group together to celebrate the day when the Constitution of India came into effect in the year 1950. India has one of the world's oldest legal systems, establishing a living legacy that has developed and evolved with its diverse people's lives. The dedication of India to the is founded in the Constitution that established India as the Sovereign Democratic Republic, which includes a federal structure, guaranteed Fundamental Rights and Directive Principles of State Policy. Republic Day 2021 Wishes, 'Jai Hind' Messages and Greetings: Share WhatsApp Sticker, Gantantra Diwas Facebook Photos, Tiranga HD Images & Signal Wishes on January 26.

Every Republic Day celebrates India's military strength, including the spectacular march-past on the Rajpath; it is also the occasion when a billion-plus Indians pay tribute to the Constitution. A living text in a modern context is the Constitution that is celebrated on Republic Day since it has taken root in the mainstream imagination. India became a republic on 26 January 1950 and has remained so. It Is the Longest Constitution in the World. Due to every Indian's deep belief and faith in the Constitution, Indian democracy has grown stronger over the last seven decades and is thriving setting an example to other countries. Republic Day 2020: Fundamental Rights And Duties of Indian Citizens Under Constitution of India.

-The Indian Constitution has been the beacon of light to both lawmakers and the common citizens. Its fundamental framework has remained unchanged for over seven decades. The values enunciated in the Preamble continue to inspire confidence in it, considering the various amendments it has undergone.

-It is important to note that the Indian Constitution was born under Mahatma Gandhi's leadership as the result of a national struggle for independence from British colonial rule. Inspired by Bapu's political ideology, by fine-tuning the promises of social equality and justice in favor of the oppressed masses, Dr. B.R. Ambedkar gave the Constitution his own stamp.

The Aims & Objectives of the Constitution

The Preamble intends that justice must be provided to every citizen irrespective of poverty, richness, caste and religion etc. The Preamble requires the abolition of all sorts of inequalities. All citizens have an equal political right, equal access to political offices & the right to vote.

One of the unique and special features of the Indian Constitution is that it has traditionally provided for a single consolidated system of courts to enforce both Union and State laws, despite the implementation of a federal system and the presence of Central Acts and State Acts in their respective spheres. At the pinnacle of the entire judicial system, exists the Supreme Court of India below which are the High Courts in each State or group of States. Below the High Courts lies a hierarchy of Subordinate Courts. Panchayat Courts also function in some States under various names like Nyaya Panchayat, Panchayat Adalat, Gram Kachheri, etc.

India’s Constitution: The Supreme Law of The Land

The written Constitution is thus the ‘fundamental law’ of a country. Thus, it is the wealth of command, control and checks-and-balance, in the form of accurate-information, enshrined in the Constitution of India. As enshrined in this most sacred text of the nation, every Indian on Republic Day also promises to uphold their duties and responsibilities. This is the spirit of the Constitution that makes every person so precious to it.

(The above story first appeared on LatestLY on Jan 25, 2021 10:49 PM IST. For more news and updates on politics, world, sports, entertainment and lifestyle, log on to our website latestly.com).